The Italian tyre company gets its sixty-sixth World Title in this discipline; in the last three rounds Gajser, Cairoli, Nagl and Febvre vie for the title for Pirelli in MXGP, Seewer and Herlings in MX2

Spectacular races were enjoyed at the Grand Prix of Switzerland, hosted in Frauenfeld a few kilometres from the Austrian and German borders. Over twenty thousand fans packed the stands of the Swiss track that was built specifically for the event and was created from hard soil that was muddy and rutty on Saturday due to rainfall while the ground on Sunday was more dry and stiff under hot sunshine. The terrain highlighted the potential of the SCORPION™ MX32™ Mid Soft; a tyre that allowed Pirelli to celebrate victory in both classes and mathematically get the sixty-sixth World Title in the FIM Motocross World Championship.

In MXGP Antonio Cairoli grasped the overall win. The eight-time world champion, who after two races is back on the works 450SX-F, trusted the SCORPION™ MX32™ Mid Soft 80/100-21 front and 110/90-19 rear. Tim Gajser took an excellent second place and preferred the SCORPION™ MX32™ Mid Soft 120/90-19 rear; the Slovenian is still leading the championship. Third place belonged to Romain Febvre who traversed the Swiss track with the same tyres as the winner. Glenn Coldenhoff rode well to fifth overall and was third in the final race. Thanks to the results at Frauenfeld Pirelli has mathematically won the MXGP title: Gajser, Cairoli, Nagl and Febvre will dispute the crown in the last three Grand Prix. 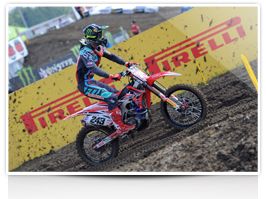 In MX2 Max Anstie repeated the victory he grabbed last week in Lommel. The Englishman, who like all of Pirelli’s MX2 elite, entrusted his machinery with SCORPION™ MX32™ Mid Soft 80/100-21 front and 110/90-19 rear and won both races. Jeremy Seewer tried hard to win his home GP but had to settle for second place overall. There was a good performance by Samuele Bernardini who scored an excellent fourth place overall Courtney Duncan had a great return to action in the FIM Women’s World Championship. The young New Zealander won the Grand Prix after coming back from injury sustained at the German round earlier this season. Switzerland hosted the last round of the EMX125 European Championship which was won once again by Jago Geerts (already crowned champion in Lommel). After three races in three weeks the FIM Motocross World Championship will resume its run later this month with the Grand Prix of the Netherlands, which will be hosted for the second year in a row inside the prestigious “TT circuit” in Assen. Race results: MXGP Race 1