Pirelli is set for a Bulgarian first

Sébastien Ogier, the new man of the hour in the World Rally Championship following his stunning maiden victory on Rally de Portugal in late May in his Pirelli-shod Citroën C4 WRC, lists skiing as one of his hobbies. It's rather appropriate, therefore, that Rally Bulgaria, venue of round seven of this season's WRC, is based in the ski resort of Borovets high in the Rila mountains and some 70 kilometres south of Bulgaria's capital Sofia. 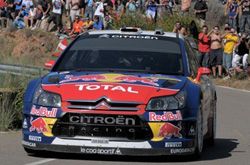 But Ogier will have no time to think about winter pursuits as he attempts to narrow the gap to Citroën team leader Sébastien Loeb at the top of the drivers' standings when the all-asphalt event takes place from July 8-11, the first time Bulgaria has appeared in the global series. It's also the first Tarmac event of the WRC season and the first time that Pirelli, the WRC's official tyre supplier under a three-year agreement with the FIA, motorsport's world governing body, has used its PZero WRC asphalt tyre in competition in 2010. Unlike on gravel-based events, where crews are restricted to using either a hard or soft compound Pirelli Scorpion tyre, on asphalt rallies the regulations allow competitors the option of choosing between the hard and soft compound PZero tyre depending on whether it is wet or dry. Usually, Priority 1 and Priority 2 drivers receive an allocation of 34 hard compound tyres for dry conditions on asphalt events and 18 soft compound tyres for wet weather usage, in addition to six hard compound tyres for pre-event shakedown. However, because weather forecasters are reporting possible thunderstorms during the week of the rally, an agreement has been reached between the teams, the FIA and Pirelli for an extra six soft compound tyres for Bulgaria. It still means crews are limited to 40 tyres in total between shakedown and the finish of the rally (tyre usage is tightly controlled by a marking process), but they have an increased amount of soft compound tyres to use if it rains. The soft compound Pirelli PZero tyre has been designed specifically for wet weather use even though, under the terms of the WRC's rules, both types of compound tyre use the same tread pattern. In the past, Pirelli engineers would have developed a tyre specifically for competition and for different levels of rain fall. But because the FIA specified that the asphalt tyres had to conform to everyday road use regulations, the PZero WRC cover is virtually identical to the tyres available for members of the public, albeit with even stronger sidewalls to combat the threat of punctures. Rally Bulgaria, a mainstay of the European Rally Championship for several seasons, will be unchartered territory for the bulk of the crews. Coupled with the prospect of mixed and localised weather, Pirelli's senior WRC tyre engineer Matteo Braga, is predicting an exciting event. "It's going to be very interesting with the possibility of wet and dry conditions due to the rally being based in the mountains," said Braga, who visited Rally Bulgaria when it ran last July. "Both Citroën and Ford will be prepared for this because on the practice rallies they did in Italy and Serbia respectively, they both experienced wet and dry conditions. But it will still create some extra excitement. There is also a big difference in the stages with old and new Tarmac, bumpy and smooth sections, up and down, fast and slow so it will be a big challenge for the drivers." With ambient temperatures not expected to exceed 28 degrees centigrade, tyre wear won't be a factor on the event, although the fluctuation in temperature between the morning and afternoon stages will have an impact on grip levels. Because the bulk of the Bulgarian stages use more of a broken Tarmac than the smooth, race track-style base found on Spain's WRC round for example, there is a tendency for the surface Tarmac to deteriorate as the heat rises, which leads to a slippery surface and an increase in stage times. Rally Bulgaria will also mark the introduction of Pirelli's new RX tyre for use by Junior World Rally Championship competitors in place of the old RS design. Using the same technology incorporated into the 18-inch RX tyre, Pirelli has produced 17- and 16-inch versions to give the competitors in the young-driver class more precision, reaction, durability and consistency, particularly on some of the longer stages (the Batak Lake stage run twice on day one measures 31.77 kilometres in length), which appear throughout the rally route. The event starts with a ceremonial start on Thursday July 8 and covers 354.10 kilometres over 14 special stages with the first car due to cross the finishing ramp at 1400hrs on Sunday July 11. The permanent service park is located at Dolna Banya airport, some 25 kilometres from the event HQ.

Pirelli is set for a Bulgarian first
Newsroom