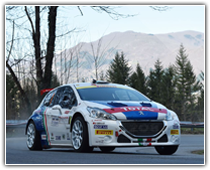 A perfect start to the Italian season. Pirelli has claimed all three podium places on the opening round of the Italian Rally Championship, the all-asphalt Rally del Ciocco. Peugeot Italia’s multiple champion Paolo Andreucci, driving a 208 T16, led home the gas-powered Ford Fiesta R5 of former European champion Giandomenico Basso, and the Peugeot of last year’s Ciocco winner Alessandro Perico. All three drivers used the same RK asphalt tyres as seen on the World Rally Championship, with the Italian championship regulations having changed significantly this year. Drivers have a reduced number of tyres at their disposal (only 14 for an asphalt rally) and points are now attributed at the end of every leg. Pirelli drivers claimed 15 of the 17 special stages, run in the hills of Tuscany with variable road surfaces and cool temperatures. Pirelli also claimed the two-wheel drive class on the Rally del Ciocco, thanks to Renault Clio R3 driver Ivan Ferrarotti. Pirelli’s rally activity manager Terenzio Testoni commented: “The P Zero tyres were extremely efficient both on the short stages of the opening day and on the longer stages of day two: confirming the effectiveness of Pirelli products in a wide variety of conditions. Despite the reduction in the number of sets available, the performance and durability of the tyres meant that we filled the entire podium.”