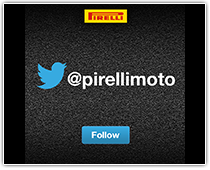 Pirelli Moto has launched its Twitter account @PirelliMoto.  Through this new channel, lovers of Pirelli Moto will have the opportunity to follow real-time updates on the most important national and international two-wheel competitions in which the Milanese tyre company is involved. It will also keep riders informed about the initiatives promoted by the brand and the most important motorcycling news. Together with the Twitter account, Pirelli Moto has also launched its #iLoveMyMoto campaign, a hashtag through which the brand asks all motorcyclists to tweet a photo that shows their love for their motorcycle. The idea behind the initiative is to contribute, retweeting these messages, to spread around the world the love for motorcycles: during the year Pirelli Moto will ask fans, riders and VIP bike lovers to post their own pictures with the hashtag #iLoveMyMoto. The Twitter channel, along with Facebook, YouTube and Instagram, constitutes a further opening of the company to dialogue with consumers. It was created in the wake of the success of the Facebook Pirelli Moto page which now boasts more than 300,000 subscribers and the highest number of interactions among competitors dedicated to motorcycle tyres.