On the other side of the world from Pirelli’s successful debut in Formula 1™ racing, also Pirelli motorcycle tyres are recording new levels of performance at the Superbike World Championship’s second round in the United Kingdom. Recording a final pole time of 1m28.099s in his third Superpole session on Diablo Superbike tyres, opening round double-win rider Carlos Checa of Althea Ducati established a new best lap at the renovated Donington Park circuit, besting not only times from previous years qualifying but also Pirelli’s expectations based on improvements made to the tracks surface and layout. Even despite the cold March temperatures of the English countryside, Checa was able to make good of his two qualifying tyres, new for this 2011, setting his fastest time in the last of the three Superpole session. Leon Haslam (BMW) will start from second position, alongside countryman Tom Sykes (Kawasaki) in third position and Jakob Smrz (Ducati) who rounds out the front row. Another local rider, Johathan Rea (Honda) managed to squeeze in a fast lap in the second session but could not repeat in the third and was left in the last position on the second row. 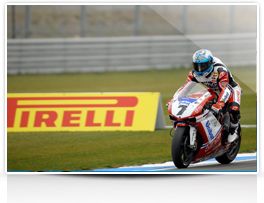 With the low track temperature (7°C), it was difficult for riders to get heat in the tyres and some opted to go out first on the Soft (SC1) rear race tyre, returning to the pits for a rear qualifier in midsession. This strategy did not work for Marco Melandri (Yamaha) who encountered traffic with the two Alitalia Aprilia bikes of Biaggi and Leon Camier, leaving him unable to set a fast time and thus missed out on the third Superpole. Tom Sykes (Kawasaki), on his third out impressed even further the paddock with a 1m28.556 on race tyres, having already used up his qualifiers in the previous two sessions. These new compound Superpole tyres are still ideal for 3-5 performance laps, but now offer additional warm-up and grip level for riders to shave up to three quarters of a minute from their race tyre setup. 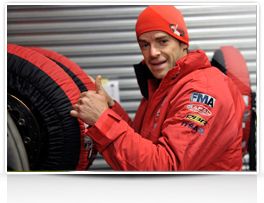 Racing Director of Pirelli Moto, Giorgio Barbier commented: “This was a really entertaining Superpole, which saw a number of different bikes vying for the front which is a great result for qualifying and a sign of strong consistency for the Diablo Superbike qualifying and race tyres. We were a bit cautious with our tyre allocation for Donington Park, bringing 4 front and 4 rear tyre solutions, primarily because we have no data from last year and must to race in March instead of June. So far the conditions have already shown quite variable, with 22°C track temperature yesterday during practice and down to 7°C today during qualifying. The lap times are still dropping though and we can certainly expect to see some personal best performances of all riders tomorrow as we look forward to the first of several European rounds of the 2011 season.”