Portugese rider Hélder Rodirgues adds to podiums earned at this year’s Dakar and first race of the Championship in Abu Dhabi It is in the magical setting of the dunes of Nafta, a stone’s throw from the film set of Star Wars took place the most recent round of rally racing: the 2011 Oil-Libya Rally of Tunisia, now in its thirtieth edition. The competitors were challenged with two race loops of about sixty kilometers before crossing the finish line. Champagne for Portugal's Hélder Rodrigues (Yamaha 450 No. 3) who won the bike category just in front of the Poles Jakub Przygonski (KTM 450 No 15) and Jacek Czachor (KTM 450 No. 5). Third in Dakar and second in Abu Dhabi just a few weeks ago, Hélder Rodrigues is decidedly improving in the FIM Cross-Country Rallies World Championship. The Portuguese rider picked up the trophy after six days of perfect control, overcoming the uncertainties of the ever changing terrain, after which he beat the Poles Jakub Przygonski (n 15) and Jacek Czachor (No. 5) Orlen Team KTM, and also grabbing the provisional lead in the FIM World Championship. The big uncertainty on the eve of this grand finale concerned mainly the third step of the podium. But a stage win was not enough for Jordi Viladoms (Yamaha 450 No. 4), to recover in from a disastrous start to the rally, marked by fuel supply problems. 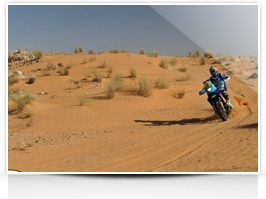 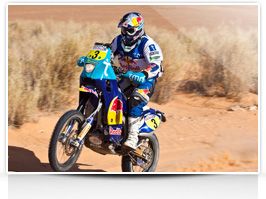 Hélder Rodrigues (Por / Yamaha No. 3): “This is a great and very intense joy. I have been waiting a long time for this moment. I want to thank all my partners and the people who believed in me. If I'm here today it’s mainly thanks to all those people. It is obvious that my season starts in full force. All this is very positive in the preparation for the 2012 Dakar.” 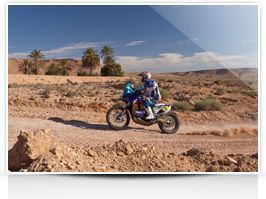