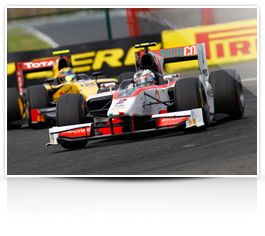 Pirelli’s P Zero GP2 and GP3 hard compound tyres will equip Formula One’s feeder series during the final round of the 2011 season at the Autodromo Nazionale Monza from 9 to 11 September, venue of the Italian Formula One Grand Prix. Located north of Milan not far from Pirelli’s headquarters, the Monza circuit is a high-speed track where drivers are on full throttle for most of the lap due to the circuit’s long straights. The 5.793-kilometre layout features three long straights where extreme high speeds are reached and 11 turns where stability, braking precision and traction are essential. Among these are the famous Curva di Lesmo, Curva Parabolica, Variante Ascari and the flat-out Curva Grande. Pirelli’s P Zero GP2 and GP3 hard compound tyres are the perfect choice for the Italian track because of its high speeds and hard braking areas, which put severe demands on the rubber. While maximum power combined with minimal drag is the key for speed, the cars will need to be set up with very low downforce to blast their way along Monza’s fast straights and through the tight chicanes and spectacular corners. Pirelli’s Racing Manager Mario Isola commented: “To Monza we will bring our P Zero GP2 and GP3 hard slicks which are designed to provide the maximum endurance in the toughest conditions. Because of the need for low aerodynamic profile, grip is quite low at Monza. Hard compound tyres are less grippy compared to softer options, but they are best suited to high-speed tracks characterised by high-speed straights and dramatic corners such as Monza. This is because they take longer to get up to ideal operating temperature, resulting in higher levels of performance and durability.” He continued: “We also opted for our harder compound as we need to equip GP2 and GP3 drivers with a resistant tyre specifically designed to cope with the high temperature levels which are reached at this circuit, avoiding the effects of blistering. In fact, because of the presence of high longitudinal forces tyre blistering may occur. This phenomenon is due to a combination of hard braking followed by high acceleration and severe cornering forces, which are specific to Monza. Adding to the challenge are some notoriously high kerbs, which also put heavy demands on the tyres.” GP2 driver Adam Carroll (Super Nova Racing) commented: “Monza will be my fourth GP2 round this year but the first round when I’ll run on Pirelli’s P Zero hard slicks. I like Monza a lot because it’s a high-speed challenging track where it is important to have a resistant tyre to rely on. After Spa-Francorchamps, I must say I prefer the medium compound to the soft tyres because it was very consistent and it enabled me to push hard during racing. I’m looking forward to seeing how the hard compound will behave at Monza.” GP3 rookie Daniel Mancinelli (RSC Mücke Motorsport) commented: “I’m new to GP3 so I’ve got a lot to learn including how to manage the car and the new Pirelli tyres which are quite different from any other tyre I have raced on so far. During my debut in Belgium last week I was surprised to get a good feeling with both the slick and wet tyres straightaway. The medium compound worked very well and I hope I will manage to adapt well to the hard slicks even at Monza.” With Romain Grosjean crowned 2011 GP2 Champion at Spa-Francorchamps, only the battle for the GP3 drivers’ title is still open with the top drivers in the standings ready for their last chance to fight for points. After Belgium, Barwa Addax Team and DAMS are still battling for the GP2 teams’ title while Lotus ART has already won this season’s GP3 teams’ title. On Friday 9 September, the GP3 drivers will take part in two practice sessions while the GP2 drivers will complete a single practice and qualifying session. On Saturday 10 September, GP3 drivers will complete their qualifying session in the morning, followed by the GP2 feature race at 15:40 and the first GP3 race at 17:20 local time. Before the Italian Formula One Grand Prix gets underway on Sunday 11 September, the second GP3 race will take place at 8:55, followed by the GP2 sprint race at 10:30. The GP2 drivers will cover 30 laps in Saturday’s race and 21 laps in Sunday’s race, while both GP3 races will last for 16 laps. For further information please contact: Laura Bartoli on +44 7500 877 304  or laura@mediatica.co.uk