Pirelli will be at the Nürburgring in Germany this weekend as sole tyre supplier to the Blancpain GT Series Sprint Cup, Lamborghini Super Trofeo and GT4 European Series Northern Cup.

What's the circuit like? The Nürburgring grand prix circuit, right next to the ‘Green Hell’ of the Nordschleife, measures 5.148 kilometres with a total of 15 corners. Having hosted the German Grand Prix in the past, it provides a considerable challenge. With its own microclimate one part of the track could be wet while the other part dry making tyre choice for the teams particularly difficult.

Which tyres is Pirelli bringing? Pirelli will bring its P Zero DHD tyre for the provisional Blancpain GT grid of 35 cars and its dedicated P Zero DH slick for the Lamborghini Super Trofeo and GT4 European Series Northern Cup grids. Weather is unpredictable at the Nürburgring and rain isn’t unusual. If the track is wet, both championships will use the WH tyre, with a sculpted tread pattern to disperse water. 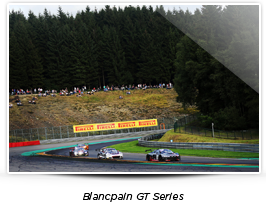 What are the most likely race strategies? There are two races over the weekend, one qualifying race and one main race, lasting just one hour each. During the race teams must change driver and tyres during a specific pit stop window. Depending on the weather there could be more than just one pit stop if teams need to change from slicks to wets or vice a versa.

Quote: Matteo Braga, circuit activity manager: “It should be an exciting weekend of racing with the title up for grabs between quite a few drivers and teams. I’m sure they’ll all be pushing hard, forming a thrilling conclusion to an unpredictable championship. The Nürburgring is a tough circuit and weather can play a major part as it’s often hard to forecast, especially at this time of year: we’ve even seen a hail storm stop the 24-hour race in the past.”