At the EuroSpeedway Lausitz all the classes of the Championship are back on stage; WorldSBK riders will have a new front development solution and a new wet rear tyre while in the WorldSSP a new soft front will be available

From 18 to 20 August 2017 Pirelli will return to the German circuit EuroSpeedway Lausitz for the ninth round of the MOTUL FIM Superbike World Championship.
After the Californian round of Laguna Seca where only WorldSBK riders took part, in Germany all categories of the Championship will again be present in the competition, for the first time since Misano Adriatico in June.

For this round Pirelli will provide riders with some new development solutions. Particularly for the WorldSBK class, there will be a new front development solution (W0657) with a very soft compound which should ensure a high level of grip and, in case of bad weather, a new wet rear tyre developed by Pirelli in the 200/60 size, the same used for slick tyres.
Something new is also available in the WorldSSP class with a new front soft option, the W0378, which uses the same compound of the standard SC1 but with a different construction process.. 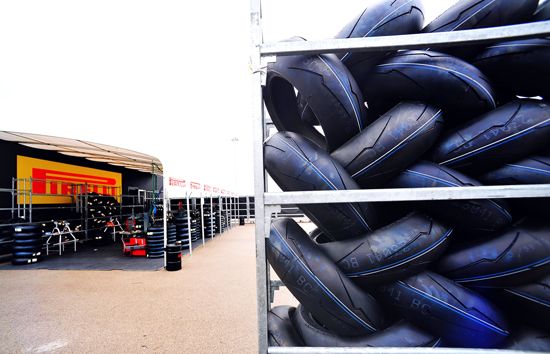 The EuroSpeedway Lausitz is located near Klettwitz, a village in the municipality of Schipkau, in the region of Lusatia, from which it takes its name.
Also known in the past as Lausitzring, this track was inaugurated in 2000 and is the latest complex in Germany to host two and four-wheel motor racing. Circuit features include the imposing grandstand that offers a 360° view of the circuit and the ability to offer thirteen different configurations. The one used by the MOTUL FIM Superbike World Championship, has a length of 4265 metres with fourteen corners, of which eight are left and six are right. The maximum track width is 18.5 metres with the first turn to the left, while the rider in pole position starts at the right side of the track.

In the WorldSBK class, the reigning World Champion Jonathan Rea (Kawasaki Racing Team) comes to the event holding a commanding lead with a 341-point haul, 59 points more than his team-mate Tom Sykes and 115 more than ducatista Chaz Davies (Aruba.it Racing - Ducati); third with 226 points. Last year on the German circuit Davies dominated Race 1 while Rea got the win in the rain of Race 2.
In the FIM Supersport World Championship leading the standings is the Frenchman Lucas Mahias (GRT Yamaha Official World SSP Team) with 105 points but Kawasaki's Kenan Sofuoglu (Kawasaki Puccetti Racing) has won the last four championship races and is just 5 points from the Yamaha rider. More detached but still in the game for the title, are Sheridan Morais and Jules Cluzel.
In SSP300 and STK1000 everything is still to be decided with the Dutchman Scott Deroue (MTM HS Kawasaki) the current leader of the new entry class and Michael Ruben Rinaldi (Aruba.it Racing - Junior Team) the main rider in the European Championship for stock machines.


The solutions for WorldSBK and WorldSSP classes

Pirelli brings a total of 4788 tyres to the EuroSpeedway Lausitz to meet the needs of the four Championship classes.

In the WorldSBK class there will be thirteen solutions available to riders, eight of which are slicks for dry and five wet options.
As for dry solutions, in addition to the qualifying rear tyre, which can only be used in the second Superpole® session, for the races, riders can choose between four front and three rear options.
At the front, in addition to the standard SC1 (soft) and SC2 (medium), the development SC1 V0952 which has already been brought to the rounds of Aragon, Assen, Imola, Donington, Misano and Laguna Seca will be present. This solution has the same compound of the standard SC1 but with different structural solutions. The fourth solution is the new development SC1 W0657, which uses a compound even softer than the standard SC1 and for this reason should be able to ensure a high level of grip at the front.
For the rear, Pirelli will rely on three solutions already used and known by the teams. The softest will be the development SC0 W0575 which was introduced at Laguna Seca and uses the same compound of the standard SC0 but with solutions and structural arrangements that have been successfully used in the past. There are also two development SC1 solutions: the W0051, already used in Motorland Aragón and Assen, which uses a different compound than the standard solution to ensure more consistent wear and greater mechanical grip, and the V1199, which was also available in Assen, Imola, DoningtonPark and Misano, and uses a SC1 compound with special structural features.

As always, in addition to the dry tyres, there will be intermediate and rain tyres available to riders in the event of bad weather. Especially for Lausitzring, Pirelli also brought a new rear development wet tyre, specification W0461, in the bigger 200/60 size which is the same as slick tyres. In WorldSSP, in addition to the usual wet solutions, the riders will have six dry solutions, four for the front and two for the rear.
As for the front, in addition to the standard SC1 and SC2, Pirelli confirms the development SC1 V1267, which uses the compound of the standard slick SC1 but with a different construction process and has already been used at Donington Park and Misano. The fourth solution consists of a new development SC1, the W0378, which uses the same compound of the standard SC1 but with a different compound distribution on the carcass.
At the rear, riders will be able to choose between the standard SC0 and the development SC1 V1201. The latter is a medium developmental solution that uses the same compound as the standard SC1 but should provide better mechanical resistance at low temperatures. It debuted at Motorland Aragón and was also brought to Assen, Imola and Misano.

• Number of solutions (dry, intermediate and wet) for the WorldSBK class: 6 front and 8 rear

• Number of tyres available for each WorldSBK rider: 39 front and 39 rear

• Number of solutions (dry, intermediate and wet) for the WorldSSP class: 5 front and 5 rear

• Number of tyres available for each WorldSSP rider: 26 front and 25 rear