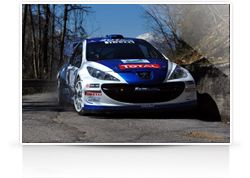 Andreucci has won the prestigious Italian title on five occasions using Pirelli tyres and made it three in a row with a dominant display in 2011 by making full use of the company’s asphalt and gravel covers, designed and developed in Milan and constructed at Pirelli’s state-of-the-art facility in Izmit, Turkey. This year, Andreucci will drive the latest wide-track evolution of the Peugeot 207 S2000. “I start every Italian championship season ready for a tough fight and this year will be no exception,” said Andreucci, who won all the Italian Championship rounds with Pirelli apart from one last season. “But knowing I have the support of Pirelli and the opportunity to use the latest tyres means I head to the Ciocco Rally – which is my home event – full of confidence. This is never an easy event to get right as the grip levels are constantly changing the higher you climb on the stages. I have plenty of experience of it though, so we will be targeting the strongest start possible to the season.” Rally Il Ciocco e Valle del Serchio, which Andreucci won last season, takes place entirely on asphalt. But with the stages climbing high into the hills of the Garfagnana region of Tuscany, the event has earned a reputation as being one of the toughest on the calendar due to the huge variation of grip and surface changes. As a result, tyres will play a pivotal role in the outcome of the rally, especially in the event of cold temperatures and inclement weather. Pirelli will supply its RX7 rubber, which is specifically designed to find traction on dry asphalt in temperatures between 10-20 degrees centigrade. Pirelli will also bring the new RX5B, in case temperatures exceed 20 degrees, and the RX9 softer slick for temperatures below 10 degrees and mixed conditions. Pirelli's product manager Terenzio Testoni explained: “The Ciocco is one of the most demanding events we face all year due to the slippery conditions, which are not just down to the weather conditions at this time of year but also the salt that is placed onto the roads, reducing grip further. Before the start of the rally, we had a successful test with Paolo that was aimed at finding the best set-up with the new car and tyres. We’ve got a very exciting line-up of drivers this year who will all benefit from the latest evolution of our tyres, so we look forward to seeing them in action.” This year’s Italian championship consists of eight rounds, five on asphalt and three on gravel. Of the notable changes, Rally Costa Smeralda switches to a date in late August from early May, while Rallye Sanremo is back on the schedule in mid-October after missing out in 2011 under the event rotation system. In addition to supplying tyres to Andreucci, several other frontrunners will reply on Pirelli tyres, including Alessandro Perico and Matteo Gamba, both of whom will drive a Peugeot 207 S2000 and are definite podium contenders. “I must say a big thank you to Pirelli,” said Perico. “In all of these years working together they have always provided me with excellent tyres and given me lots of satisfaction.” In the Junior championship, Citroen DS3 R3T driver Simone Campedelli returns to defend his title with Pirelli this year. The Italian firm will also equip the Renault Twingo R2 Trofeo once more. The 35th Rally Il Ciocco e Valle del Serchio gets underway with a ceremonial start on Thursday 22 March at 1900 from Castelnuovo Garfagnana. On Friday 23 March competitors tackle six special stages, seven more planned for Saturday 24 March. The event finishes in the evening back in Castelnuovo Garfagnana, after a total of 160.90 competitive kilometres. For more information about Pirelli, please contact Anthony Peacock on +44 7765 896930 or anthony@mediatica.co.uk