There's no time for rest in the GP3 Series. One week after the fifth event of the season at Hockenheim in Germany, the Pirelli-shod drivers will be back in action at the Hungaroring near Budapest this weekend for round six of this exciting contest for young Formula One hopefuls. 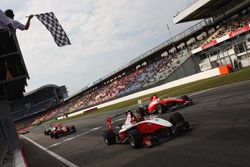 While the teams have been busy rebuilding and preparing their cars for the tight and twisty Hungaroring, Pirelli's tyre technicians have also been hard at work. On each round of the GP3 Series, drivers are allocated three sets of dry weather tyres and two sets of wet weather tyres. With upwards of 30 cars on the grid in GP3 Pirelli has been keeping a close eye on tyre production and supply given the short gap between the two events. Once again, Pirelli and the championship organisers have opted for the soft-compound tyre, which was first used at the European Grand Prix in Valencia. This tyre has been chosen precisely because of its proven adaptability, giving drivers both power and control within a wide range of circumstances. Pirelli's Racing Manager Mario Isola explained: "The Hungaroring in Budapest is one of the circuits where it is clear that the soft compound tyre is the best option, given that the nature of the surface is not at all aggressive on the rubber. A soft-compound tyre should enable drivers to find the maximum grip possible, even though temperatures are likely to be warm and dry. We're learning a lot from the inaugural season of the GP3 series and working to refine our tyre compounds all the time. We expect to come away from the Hungaroring with some more valuable lessons." The new GP3 series is all about giving young driver the opportunity to make their way into GP2 and eventually into Formula One. With 11 current Formula One drivers having graduated from GP2, GP3 is a vital first step up the ladder of talent. In order to give these eager young drivers the best possible opportunity to display their talents, Pirelli has developed a stable and consistent tyre that puts the emphasis firmly on driver ability. Equally, some degree of degradation is deliberately built in, so that up-and-coming drivers can also learn the art of managing their tyres. The Hungaroring hosted its first Formula One Grand Prix in 1986 when 200,000 spectators descended on the track. The circuit is characterised by its long start/finish straight and viewing opportunities due to its location in a valley. With numerous hairpins and chicanes, average speeds are not the highest the GP3 regulars will experience this season, but circuit is a challenge nonetheless, particularly as ambient temperatures rarely dip below 30 degrees centigrade. Given the 4.381-kilometre circuit's layout, the 13-inch medium-compound PZero tyre will have to cope with heavy loads under acceleration, braking and cornering. Mexico's Esteban Gutierrez continues to lead the GP3 Series following his victory in the second race at Hockenheim last weekend. His advantage over Canadian Robert Wickens, winner of race one, stands at 30 points. In the teams' standings ART Grand Prix heads Status Grand Prix by 43 points. Practice at Hungaroring takes place from 16:50 on Friday 30 July. Qualifying begins at 08:45 on Saturday morning, July 31, followed by race one at 17:20. Race two starts at 09:25 on Sunday, August 1, with both races lasting half an hour.