Pirelli ready for start of a new era in FORMULA 1 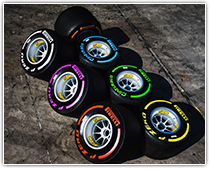 The new 2017 range of Formula 1 tyres represents the very top of Pirelli’s ultra-high performance technology. Created in Italy, but seen all over the world. Having entered the sport again in 2011 following three previous stints in the 1950s, 1980s and 1990s, Pirelli is now on its seventh season of Formula 1 as part of an agreement that runs until the end of 2019. Pirelli will be as well title sponsor of the Spanish Grand Prix from May 12-14, followed by Hungary in late July and Belgium in late August. Hard, Medium, Soft, Supersoft, Ultrasoft, Intermediate, Wet: every compound is brand new for this year, with entirely new constructions as well. The objective for all these tyres, shared with the FIA and the teams, is to deliver tyres with a higher level of performance together with lower degradation, allowing the drivers to push hard during every phase of the race. The most obvious visual difference is that the tyres are now around 25% wider, both front and rear, increasing from 245 to 305mm at the front and 325 to 405mm at the rear. This is part of a package of measures expected to cut lap times by around five seconds relative to 2015. Kimi Raikkonen’s fastest time of the Barcelona test (1m18.634s) was quicker than 2015 Nico Rosberg pole position in Spain (1m24.681s). The improvement was already more than six seconds, rather than five and could have been even bigger. For the first five grands prix, from Australia to Spain, teams have identical tyre allocations: seven sets of the softest compound available, four sets of the middle compound, and two of the hardest compound. From the sixth grand prix in Monaco, normal rules apply: teams will select 10 sets of the 13 available.