Pirelli reaffirmed its links with motorsport at every level 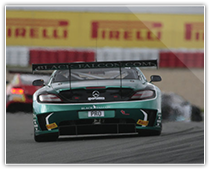 Pirelli, the sole supplier to FORMULA 1, reaffirmed its links with motorsport at every level. The Italian tyre firm will equip the British GT Championship in a multi-year deal from 2016 onwards. The announcement follows Pirelli’s agreement to extend its supply contract to the Blancpain GT series and the renewed contracts in Italian Formula 4 and GT championships for 2016-2017. In total, up to 30 different teams compete on the British GT Championship, which features an obligatory pit stop for a driver change at each race, and, from next year onwards, Pirelli P Zero competition tyres that are similar to those used on the Blancpain series. According to the tyre manufacturers, these bespoke Pirelli race tyres have plenty in common with the P Zero road tyres made for the showroom equivalents of the cars seen on the British GT series, leading to direct technology transfer that ultimately benefits the everyday motorist. Pirelli also renewed Blancpain GT series contract. This means that Pirelli tyres will continue to be seen on the entire range of competing cars until at least the end of 2020: a continuation of the strong relationship that began in 2012. The Blancpain GT series includes both sprint and endurance races, and it has been created for road-going supercars, most of which are equipped with Pirelli tyres as original equipment. As such, it provides a direct link between Pirelli’s road car products and motorsport. Both professional and semi-professional drivers compete on the series which takes place on some of the best-known tracks all over Europe, with the highlight of the championship being the Spa 24 Hours in Belgium. This is Pirelli’s biggest engagement in motorsport out of all the 300 or so championships that the Italian firm supplies worldwide, with approximately 9000 tyres taken to this one event alone. Pirelli renews its exclusive contract with the national Formula 4 and GT championships in Italy. Both championships will continue to use only Pirelli tyres throughout the 2016 and 2017 seasons, at a variety of circuits all over Italy. One of the key focuses for Pirelli is the domestic market, with Pirelli having first equipped Formula 4 in Italy during its inaugural season, in 2014. Pirelli forms part of an all-Italian approach to Formula 4 in Italy, with Tatuus building the chassis, Abarth providing the 1.4-litre turbo engine, and Magneti Marelli supplying the electronics. Fitting in with the ethos of keeping the championship simple and cost effective, so that driving talent is the key factor, just two types of tyre are supplied for all the races: 13-inch P Zero DM slicks and Cinturato WM wets. In Italy, the national GT championship has proved to be extremely popular, with Pirelli supplying just the P Zero DHC slick tyre and Cinturato WH wet tyre next year. The rules will be similar to those adopted by the Blancpain series, with just one compound for dry and wet, in order to decrease costs but increase competition. Up to 10 tyre sizes will be offered to cater for all the different cars, from 315/680-18 to 325/705-19.
Newsroom

Pirelli reaffirmed its links with motorsport at every level