Tim Gajser wins once more and holds the Red Plate in the MXGP class, Jeffrey Herlings still rules in MX2 and is again unbeatable through the sand 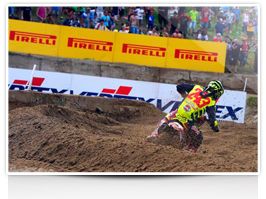 Hot weather and high humidity greeted the riders at Mantova for the twelfth round of the 2016 FIM Motocross World Championship; the Grand Prix of Lombardia. The ‘Tazio Nuvolari’ layout is made from sandy soil and was the stage for more great performance from the SCORPION MX™ SOFT 410 rear and SCORPION™ MX32™ MID SOFT front; tyres that allowed Pirelli to grab victory in both classes and to dominate again this season. Tim Gajser showed his great strength and rode to a strong double win at Mantova. Author of excellent starts and consistently forceful, the Slovenian rookie used SCORPION MX32™ MID SOFT 80/100-21 front and SCORPION MX™ SOFT 410 120/80-19 rear for his moto haul in Italy. In the championship standings his lead rose to 92 points with six GPs still to go. Mantova saw a great race by Antonio Cairoli who, thanks to fourth overall, rose to second place in the championship table surpassing Romain Febvre, who was absent due to the head injury sustained in England. The eight-time world champion - nursing a battered hand after a heavy landing sustained in England seven days earlier - fought like a lion and after starting first in race two he tried to defy Gajser. In the last part of the race, due to a slip, he lost a position and dropped to third. Two good rides allowed Jeremy Van Horebeek to occupy fifth place overall at the end of the day.