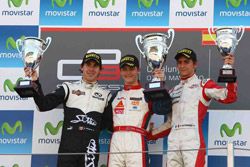 Nearly 20 years after Pirelli concluded its engagement at the highest level of world motorsport, at the end of the of the 1991 Formula One season, the Italian tyre company is back with a new open-wheel challenge. Pirelli got its agreement to supply the inaugural GP3 series with control tyres underway at the opening two rounds in the Circuit de Catalunya this weekend: the home of the Spanish Grand Prix. GP3 has been created as a stepping-stone to GP2, which is now widely acknowledged as the established route to Formula One. A full grid of 30 GP3 cars lined up for the opening two races, on Saturday afternoon and Sunday morning. All of them were using Pirelli's newly developed PZero 13 inch control tyres. Prior to each weekend, either a soft, medium or hard compound is nominated for all the drivers to use, and in Barcelona this weekend - as will commonly be the case this year - the medium compound was used. The tyres have to cope with a wide range of conditions, because the scheduling of GP3 races often takes place at the coldest times of the day. They also have to be strong, because with 30 ambitious young drivers in identical 280-horsepower cars, some degree of contact is inevitable! The first race on the demanding and technical Catalunya circuit - a favoured venue for Formula 1 testing - was won by Norwegian driver Pal Varhaug, driving for Jenzer Motorsport. Race two was claimed by America's Alexander Rossi, driving for the ART Grand Prix team. All the drivers took maximum advantage of the opportunity they had been handed to demonstrate their capabilities in front of the world's Formula One and GP2 teams, and they also all gave the thumbs up to Pirelli's new tyres - which proved to be both stable and reliable on their race debut. Part of Pirelli's brief from the GP3 series organisers was to incorporate some artificial degradation within the tyres, in order to teach the young drivers how to look after their rubber by driving smoothly: a skill that will be vital for their future careers. The specification for this year's GP3 tyres is not set in stone and some adjustments could still be made in future, as Pirelli's Racing Manager Mario Isola explains. "We're delighted with the way that this new adventure has started for us, but of course we are learning all the time and it could be that, together with the GP3 organisers and teams, we eventually decide to make the tyres degrade more," said Isola. "As a beginning, we could not ask for more: the tyres have performed perfectly and the drivers have enjoyed driving on them. It's a fantastic sight to see Pirelli's yellow trucks back in a Grand Prix paddock after so many years and we're really looking forward to the rest of the season now." The next two races of the nine-round GP3 series takes place at the Turkish Grand Prix, in Istanbul Park from May 29-30.