Pirelli scores a perfect 10 with Andreucci and Peugeot 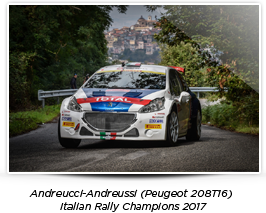 Following its clean sweep of all the titles on the European Rally Championship, Pirelli has added to its rallying success this year by claiming another Italian title with the famous Peugeot Italia 208 T16 duo of Paolo Andreucci and Anna Andreussi. The Italians claim their 10th overall rally title in Italy, with Peugeot achieving the same benchmark on this prestigious national championship, as well as claiming the two-wheel drive title.

Not only that but Luca Rossetti, co-driven by Matteo Chiarcossi in a Skoda Fabia R5, won the Rally Due Valli overall this weekend; which was based near Verona and concluded the 2017 Italian Rally Championship. Rossetti celebrated his return to the Italian series in the best possible way, having previously taken the domestic IRC title, again with Pirelli.

Other performances of note included a win for 21-year-old Damiano De Tommaso in the Peugeot Competition 208 Top trophy, earning himself a factory drive with the all-conquering Pirelli-supplied Peugeot Italia team for 2018. Italy’s Junior Champion Marco Pollara finished a promising sixth overall on his debut with the Peugeot 208 T16, while Gianandrea Pisani also did well in his Toyota GT-86 CS-R3: part of an innovative driver development programme run by the Italian motorsport federation and supported by Pirelli. Kevin Gilardoni was the winner of the 2017 Renault Clio R3T Trophy, and Emanuele Rosso of the 2017 Renault Twingo R1 Trophy.

Paolo Andreucci: “Our 10th Italian title is a fantastic way to end the season and I have to sincerely thank the team and everyone from Pirelli, who supplied me with tyres that enabled me always to get the maximum out of myself and the car. After winning the first leg of the rally, I then concentrated on just getting to the finish and ensuring the necessary result to take this historic title.

Terenzio Testoni, Pirelli rally activity manager: “For Pirelli, this has been a fantastic year thanks to our drivers who have cleaned up on all the championships we targeted: the European Rally Championship, the European Historic Rally Championship, the European Hillclimb Championship, and of course now our home championship in Italy. These titles can be added to another long list of titles within the different classes, starting off with those designed for young drivers: very much an integral part of our philosophy. These include the European Junior Under 27 and Under 28 championships, and of course the Italian Junior Championship. On asphalt and on gravel, with both four and two-wheel drive cars, Pirelli tyres have demonstrated their wide-ranging capabilities and made a significant contribution to all these amazing victories.”

Pirelli scores a perfect 10 with Andreucci and Peugeot
Newsroom