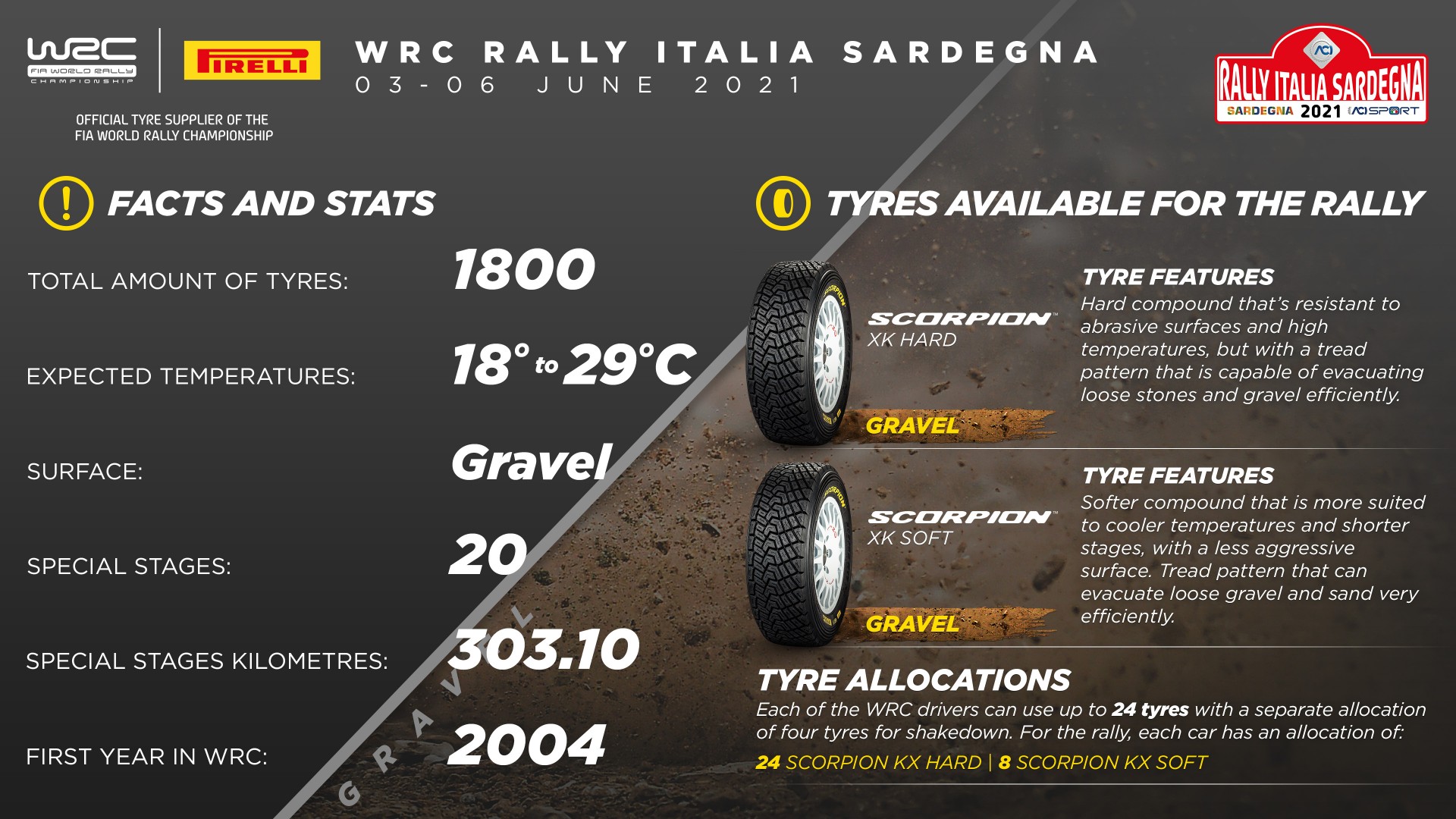 Milan, June 1, 2021 – After a successful debut on the previous round in Portugal, Pirelli’s Scorpion KX gravel tyres for the top class of the FIA World Rally Championship will make a homecoming of sorts on the next round in Sardinia: The Italian island was where Pirelli carried out much of its development testing last year in preparation for its return to the WRC for 2021.

THE PIRELLI TYRES IN SARDINIA

Scorpion KX: Pirelli’s gravel rally tyre comes in hard and soft compounds. In Sardinia, the hard will be the first choice and is designed to cope with the most abrasive surfaces and offer durability over longer stages. The soft will be an alternative providing optimal grip not only on damp and wet roads but also on sandy and loose gravel conditions, specially during the first pass on the stages. In both compounds, the tyre features additional reinforcement, particularly in the sidewall, to guard against cuts and lacerations.

Terenzio Testoni, rally activity manager: “After Portugal, we’re looking forward to face another demanding gravel rally with the Scorpion KX tyres and especially our ‘home’ event, where we already gathered a lot of data during testing last year. We have also now been busy analysing all the information we gathered in Portugal which will guide the advice we provide to the teams in Sardinia. Of course, in Sardinia the temperatures can be even higher and the conditions even tougher, but this should make the hard compound tyre more favourable as opposed to the soft, for which there will again be a limited allocation. This means that we can expect some different strategies among the three top teams. The new stages on the final day are very slippery and sandy, so the soft tyre could make a real difference.”

Pirelli will bring around 1800 tyres to Sardinia, of which roughly 400 will be for the top class of World Rally Cars.

Pirelli will also supply 1400 tyres to the other four-wheel drive cars in the event, including those entered in WRC 2 and WRC 3:

1400. Pirelli covered around 1400 kilometres – the equivalent of five WRC rallies – in less than three months in Sardinia last year, testing prototype tyres with Andreas Mikkelsen behind the wheel of a Citroën C3 WRC.

Rally Italia Sardegna can feature some of the highest temperatures of the entire WRC season with heat in excess of 30 degrees centigrade. This, combined with an abrasive and rocky surface makes the stages a very tough challenge for tyres – which is exactly why Pirelli tested there for its WRC comeback.

WHAT TO LOOK OUT FOR

New stages. The event’s base returns to Olbia on the east coast of the island this year after seven years in Alghero on the west coast. Many of the same stages will still continue to feature, especially on Friday and Saturday, but Sunday’s stages to the north of Olbia will be new to the current crop of drivers.