With five races remaining Tony Cairoli heads three other Pirelli riders at the top of MXGP while Jeffrey Herlings strides closer to another MX2 crown. 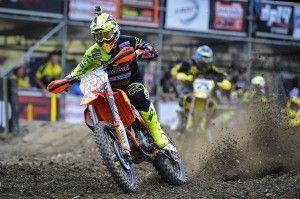 More FIM Motocross World Championship success is drawing closer for Pirelli and their SCORPION MX 32™ in both MXGP and MX2 classes as the twelfth round of the series at Uddevalla for the Grand Prix of Sweden provided yet another happy streak of results.
Pirelli have so far amassed 60 FIM titles in this discipline and have been a stronghold of consistency, quality and performance in the FIM Motocross World Championship for a number of years. Looking at more recent history, since 2010 Pirelli SCORPION MX 32™ tyres have grasped eight championships,thanks to the four obtained by Tony Cairoli in MX1 and two celebrated by Jeffrey Herlings in the MX2 class coming from the fruitful collaboration with KTM and with another two thanks to Ken Roczen and Marvin Musquin. The roots of Pirelli in the FIM Motocross World Championship actually lie much further back in 1980 and since then has prospered thanks to names like André Malherbe, Georges Jobé and Harry Everts, father of ten times world champion and former Pirelli number one, Stefan Everts.
“Commitment at the highest levels of Pirelli’s racing activity was the turning point for the growth and continuing improvement of our off-road product,” said Pirelli Moto Racing Director Giorgio Barbier. “In particular with the SCORPION MX 32™, as much as its predecessor the MT 32™, which form the longest running product success story in the sport of motocross. In the wake of the spoils and satisfaction enjoyed over the years we are pleased to be able to continue the high level of support and service that the current top level racers enjoy thanks toco-ordinator Roberto Sanzone who has a strong experience in racing and has previously followed for Pirelli both four wheels racing as well as the Superbike World Championship. The quality of the service and the product offered is one of the secrets as to why Pirelli has been chosen by the best riders and most prestigious teams for such a long period.”
In Sweden Antonio Cairoli marked his fourth double of the season, which in turn delivered the 70th triumph of his career. The MXGP leader, in many respects, steered his KTM across the slick and bumpy ground with Pirelli SCORPION™ PRO front and MidSoft 32 rear with 120/90-19 dimensions. He scaled the top step of the podium ahead of factory Yamaha’s Jeremy Van Horebeek; the Belgian competing with SCORPION™ MX MidSoft 32F and MidSoft 32 and able to move up to second place in the championship as a result. Only fourth in the first moto Suzuki’s Clement Desalle sustained his first ‘DNF’ of the season after a heavy crash at the start of the second race. An all-Pirelli podium was completed with Suzuki’s Kevin Strijbos on the third step.
Pirelli SCORPION™ MX MidSoft 32F front and MidSoft 32 rear ‘dominance’ was clear in MX2, where championship leader and title holder Jeffrey Herlingswon again and is currently undefeated this season. He now has a commanding 135 point advantage in the category over Red Bull KTM team-mate Jordi Tixierwho was second in Sweden and classified in front of Honda’s Tim Gajser.
The same outcome was seen in the fifth round of the European EMX300championship where Samuele Bernardini prevailed from Marco Maddii, while thanks to a scorecard of 4th and 9th Steven Clarke kept control of the red plate in Grand Prix’s intensely competitive feeder series; European EMX250.
Round thirteen will take place in the sand of Hyvinkää for the Grand Prix of Finland on July 13th. 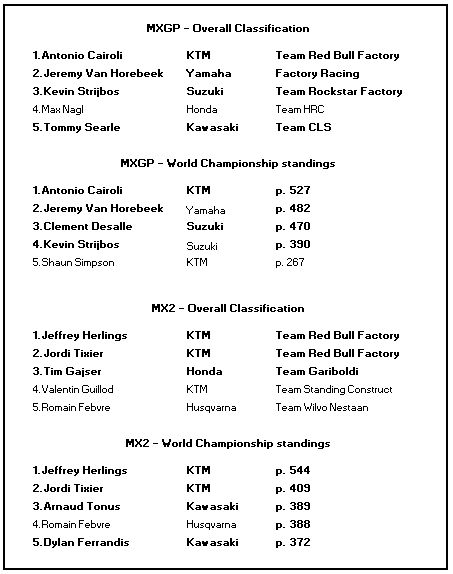