Desalle and Herlings walk the top step of the podium

The FIM Motocross World Championship is clicking off the dates but the Pirelli SCORPION™ MX MidSoft 32F front and rear combination continue to hold firm at the very front of both MXGP and MX2 classes. The premier category was owned by Clement Desalle who took advantage of a bad day for Antonio Cairoli by scoring second and first positions in the two motos to classify ahead of home favourite Max Nagl. The world champion and factory KTM rider could only manage fifth overall due to a stomach virus. For Cairoli it meant a scorecard of fifth position in the first moto and fourth place in the second. The third step of the podium behind Desalle and Nagl belonged to ever-present Yamaha rider Jeremy Van Horebeek; the Belgian racking-up his tenth consecutive podium finish by nudging Suzuki’s Kevin Strijbos down to fourth. A Pirelli clean sweep of the rostrum was also evident in MX2. The superlative Jeffrey Herlings strode away unchallenged on his works KTM to a seventh clear double. The reigning world champion left behind Slovenian Tim Gajser and team-mate Jordi Tixier; the Frenchman breaching the top three for the third event in a row. Bad luck lay in store for Swiss Arnaud Tonus. The Kawasaki rider only just holds on to second position in the championship after a practice crash led to a dislocated shoulder and a short period of unconsciousness. The SCORPION MX 32™ was prominent in European EMX125 with Brian Hsu winning for the second time this season on his Suzuki equipped with SCORPION™ MX MidSoft 32F front and rear. The German rider, who lives in Italy, is second in the series and gained valuable ground on leader and Pirelli rider Davy Pootjesafter the Dutch teenager had to withdraw from the race after injuring his shoulder on Saturday. The twelfth round of the FIM Motocross World Championship will take place at Uddevalla on July 6th for the Grand Prix of Sweden. 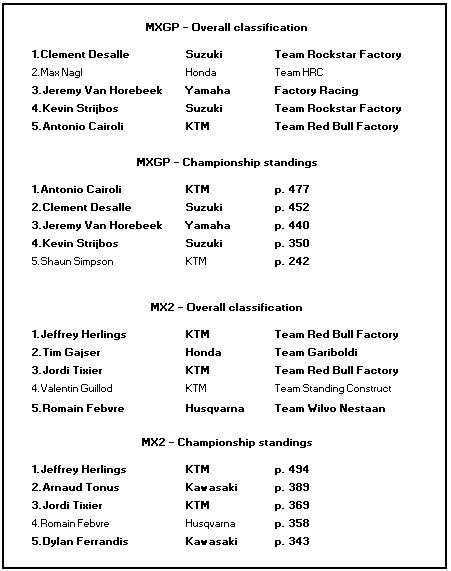