KTM riders Tony Cairoli and Jeffrey Herlings, 2013 FIM World Champions respectively in MX1 and MX2, close their seasons in Lierop and talk about the alliance with Pirelli that helped to secure the latest success in a vast history of glory for the Milanese factory The commitment of Pirelli and run of success in the sport has been consistent for a number of years and has been prolonged thanks to the association with KTM and their talented array of riders. This can be seen by the fact that since 2010 Pirelli have won eight times – in both classes – with the Austrian brand creating a formidable combination with the Scorpion MX. Cairoli has won MX1 for the last four years while Jeffrey Herlings has ruled MX2 for the last two seasons and followed in the footsteps of Ken Roczen and Marvin Musquin. To get an idea of the effort and work put into motocross by the company this year 6882 tyres have been brought to Grand Prix events with 1685 used, and 2550 mousse tyres, 1320 making it to the track to contribute to 14 GP wins in MX1 and 16 in MX2. Speaking on the long-term collaboration with Pirelli seven times World Champion Tony Cairoli said: “I’m very happy with the continued reliability that Pirelli bring through all these years, not to mention the high performance across a range of terrain and race conditions that really separate them from the competition. It is not difficult to choose from a variety of models but the versatility of the Scorpion MX MidSoft 32 means that I have the same feeling whether I’m on sand or hard-pack and mentally that is a strong point. You know, tyres in motocross are not as fundamental as they are in other motorsports but they certainly contribute to the overall result.” Jeffrey Herlings, upon taking his second MX2 crown riding the works KTM250SX-F equipped Pirelli Scorpion MX and then pushing on for his 13th double moto success at Lierop was compelled to express his satisfaction with the Italian marque: “I’ve raced with Pirelli since I was a kid so I don’t have too much experience of other brands but the Scorpion MX is such a good product because it is very durable and also offers such steady traction so I can really ride exactly how I want, I have been unbeatable in the sand and this is in thanks also to the Scorpion MX MidSoft 32 front and Scorpion MX Soft 410 rear, combination that is outstanding. Another reason that I really like and admire Pirelli tyres is that I always have plenty of options at each circuit.” 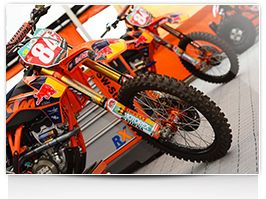 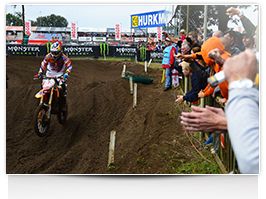 In the final standings of the MX1 and MX2 categories six of the first nine riders in the classification have been using Pirelli rubber; further evidence of the dominance and superiority of the brand at Grand Prix level. In addition to the world champions in 2013 around 50% of the MX1 field have chosen to go with Pirelli. These include Cairoli’s team-mate Ken De Dycker, Suzuki riders Clement Desalle and Kevin Strijbos, Honda’s David Philippaerts, Tommy Searle on the CLS Kawasaki, factory Yamaha racers Joel Roelants and Steven Frossard and other KTM representatives like Davide Guarneri, Xavier Boog, Rui Goncalves and winner in Lierop, JK Racing Yamaha’s Shaun Simpson. Many also elected for Scorpion MX in the MX2 division: Runner-up to Herlings and team-mate under the KTM awning Jordi Tixier, and then Yamaha’s Christophe Charlier and Petar Petrov, Kawasaki’s Alessandro Lupino, Arnaud Tonus, Dylan Ferrandis and Valentin Teillet as well as Honda riders Harri Kullas and Aleksandr Tonkov with KTM’s Glenn Coldenhoff and Pascal Rauchenecker also on the list. Of the Pirelli Scorpion MX range the three most popular tyres were: Mid Soft 32, Soft 410 and Mid Hard 554. The Scorpion MX Mid Soft 32 was the most used tyre throughout the course of the seventeen round series. Specific profiles whether for mud or sand, and intermediates for grass or dry soil were found to be effective in all types of conditions from competition to training to fun ride-outs and constantly offered reliable performance even in the most trying of circumstances. Providing excellent traction to enable the best transfer of power to the ground and utilising a V-block arrangement on the profile to ensure stability under braking and cornering grip. The front tyre boasts side knobs to facilitate the best lines and trajectory on whatever track surface that needs to be tackled. The Scorpion MX Soft 410 was adopted in around 15% of the Grand Prix fixtures. This tyre excels in soft ground like mud or sand, pushing traction to the fore and also using self-cleaning properties and design to enable optimum grip right from the beginning of the race. The compound is key, and the rear tyre blocks - with an inserted blade for enforced strength - assist towards the best possible capabilities in loose and unpredictable terrain. The least used but no means the less important is the Scorpion MX Mid Hard 554 chiefly for hard-pack and tough dirt and grassy as well as compact sand and stone; the sort of surfaces commonly found on motocross circuits around the world. The tread pattern has been designed to offer the best potential on soft surfaces, but with an increase of the solidity of the terrain the product continues to guarantee the best power transferal. The tyre exudes flexibility for consistent high quality and resistance to skids, slides and drifts and extra abrasion. 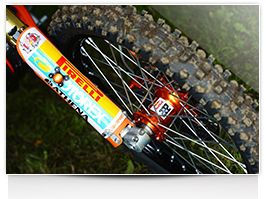 Thanks to the Scorpion MX range – and all tyres used in competition are the same as those that can be bought off the rack – everybody can enjoy the best riding sensations and thrills that only motocross can convey. MX1 Final World Championship standings