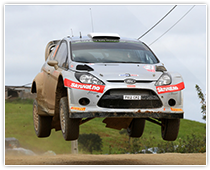 Norwegian driver Henning Solberg has equalled his best-ever result on the Rally de Portugal, round four of the World Rally Championship, and claimed the best overall result for Pirelli in its comeback year by finishing fifth. This year Pirelli is focussing on customer competition, and just as he was on his last rally in Sweden, Solberg was the top privateer home in Portugal, co driven by Ilka Minor in a Ford Fiesta RS WRC. Solberg was able to save a fresh set of soft tyres for the final day, and climb as high as fourth overall, before dropping back on the penultimate stage. As usual, the rough gravel roads of Portugal proved to be extremely demanding but the unique tread pattern of the new Scorpion XR ensured that Solberg was able to stay on the road and keep tyre wear firmly under control. This was despite only trying the tyres for the first time in the shakedown. As well, Lorenzo Bertelli took full advantage of the grip and durability of his Pirelli Scorpion tyres to edge closer to the lead of the WRC 2 title standings with a strong showing on Rally Argentina. Driving a Ford Fiesta RRC on the soft compound version of Pirelli’s Scorpion tyre, the promising Italian claimed three stage wins on his way to fourth in the category. He leaves South America second in the WRC 2 standings, four points behind leader Yuriy Protasov. Recent heavy rain, coupled with more showers during the course of the event, made for difficult conditions on the all-gravel stages, 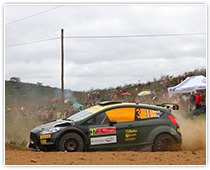 which ranged from damp in places to mud-coated in others. Pirelli equipped Bertelli and co-driver Mitia Dotta with its soft compound Scorpion XR7 tyre for the damp conditions and senior company engineer Matteo Braga was more than satisfied with how the tyres performed on the 14-stage event, which totalled 405.10 competitive kilometres.