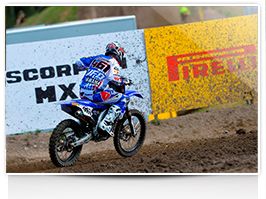 The eleventh round of 2015 FIM Motocross World Championship was hosted at the Uddevalla circuit in Sweden, located at about sixty kilometres north of Gothenburg. The Swedish facility offered a hard and slippery surface on which Pirelli SCORPION™ MX32™ tyres provided excellent performance and have allowed riders to post some good results. In the MXGP class Romain Febvre continued his great momentum winning both races and extending his lead to 39 points in the championship. The Frenchman, who raced with SCORPION™ MX32™ 80/100-21 front and 120/90-19 at the rear has won six out of the last nine motos and does not seem to feel the weight of the red plate as MXGP leader; a position he has surprisingly assumed in his first season in premier class. An excellent second place overall was taken by Jeremy Van Horebeek. The Belgian, in contrast to his team-mate and winner of the Grand Prix, chose the SCORPION™ MX32™ 90/100-21 front. The same type of Pirelli tyres was picked by Kevin Strijbos, who won Saturday’s qualifying race and got third overall on Sunday. To complete a triumphant day for Pirelli Dean Ferris and Todd Waters took fourth and fifth overall. Antonio Cairoli was seventh in the classification and is now second in the championship standings. 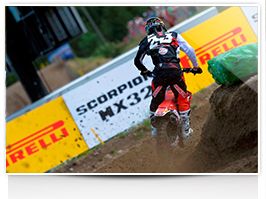 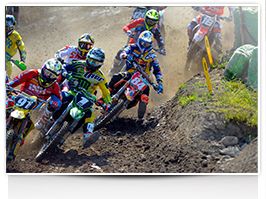