The ‘Suphan Buri Land Motorsport’ hosted the second round of the 2016 FIM Motocross World Championship. The brand new and technical circuit is characterized by a medium-hard base soil that added to temperatures above 40 degrees has put a strain on riders and tyres. These conditions highlighted the excellent performance of the Pirelli SCORPION™ MX32™ that allowed the Pirelli athletes to find positions at the very top of the standings. In both classes eight competitors equipped by the prestigious Milanese tyre brand finished in the top ten. 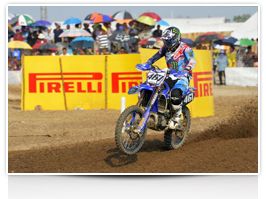 A double victory in MXGP class was taken by Romain Febvre. The defending World Champion raced with SCORPION™ MX32™ 80/100-21 front and 110/90-19 on the rear and also grabbed the top spot the championship standings. An excellent second place belonged to Tim Gajser that, unlike the winner, preferred the SCORPION™ MX32™ 120/90-19 rear tyre. Jeremy Van Horebeek, thanks to two good races, ended the Grand Prix on the third step of the podium. Bad luck was in store for Antonio Cairoli (fifth overall) who after finishing second in the first heat was forced to make a difficult comeback in the second due to a stall at the start. Luck also evaded Ben Townley, who was an excellent second in the final race but had to retire in race one due to a technical problem after a crash. Pirelli, with three riders aboard three different motorcycle brands, also monopolized the podium of the MX2 class that was ruled by Jeffrey Herlings. The Dutchman, equipped by SCORPION™ MX32™ 80/100-21 front and 110/90-19 at the rear, took the lead of the two races right after the start and rode unhindered to the finish. Behind him Jeremy Seewer, second, confirmed his effective speed and form while Aleksandr Tonkov, third overall, was the author of a good comeback in race two. Pauls Jonass rounded out the top five of the day. 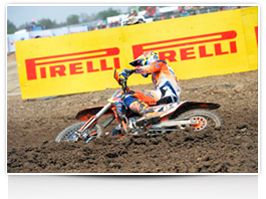 In Thailand Pirelli was the tyre chosen by the majority of riders with 16 out of 23 starters in MXGP and 15 out of 29 in MX2 running the firm’s products. After completing the first two rounds of the season the riders and teams will gather at the Grand Prix of Europe, to be hosted in Valkenswaard on March 27th/28th in Holland for round three of eighteen. Race results: MXGP Race 1 1. FEBVRE Romain (FRA) 2. CAIROLI Antonio (ITA) 3. GAJSER Tim (SLO) 4.BOBRYSHEV Evgeny (RUS) 5. VAN HOREBEEK Jeremy (BEL) MXGP race 2 1. FEBVRE Romain (FRA) 2. TOWNLEY Ben (NZL) 3. NAGL Maximilian (GER) 4. VAN HOREBEEK Jeremy (BEL) 5. GAJSER Tim (SLO)