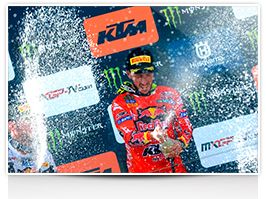 As expected it was a hot weekend at Talavera de la Reina for the sixth round of the 2015 FIM Motocross World Championship. The Spanish circuit, with its uphills and downhills and a consistent and grippy soil is located in the center of the Iberian Peninsula in the province of Toledo and hosted, for the second year in a row, the Grand Prix of Spain. With excellent performances, Pirelli’s riders monopolized the podium in MXGP class and grabbed strong results in MX2.

Talavera witnessed the first win of the season for Antonio Cairoli in MXGP who opted to use KTM 450SX-F for this Grand Prix instead of his usual title-winning 350. With the ‘bigger’ bike, equipped with Pirelli SCORPION™ MX32™ in 80/100-21 for the front and in 120/ 80-19 at the rear, the Sicilian wrapped a near-perfect weekend despite the lingering effects of a left hand injury sustained in the Netherlands two weeks ago. First in practice and in the qualification heat he earned third place in the first heat and won the second. Max Nagl, that faced the race with the prototype Pirelli tyre that helped him to victory in Arco, keeps the lead in the championship. In Spain Nagl scored the same points as Cairoli but he finished second due to his ranking of third place in the second moto. It was an amazing race for Romain Febvre. The Frenchman was third overall and selected the same Pirelli tyres as Cairoli. He walked the podium for the very first time in his career in MXGP. Clement Desalle, who is entrusted to SCORPION MX™ 32™, took fourth place overall but he keeps second position in the championship standings. 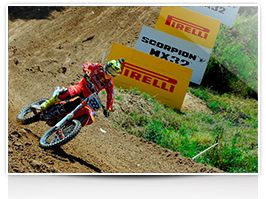 Pirelli missed out on victory in MX2 but Jeffrey Herlings, winner of Race 1, finished in second place despite a spectacular crash in the second race - luckily without injury - that forced him to a difficult but very strong comeback charge. The Dutchman, who opted for the SCORPION MX™ 32™ 80/100-21 front and 110/90-19 at the rear, is still in control of the MX2 contest by some 56 points. Third place went to Jordi Tixier, who has scaled the podium for the last three Grand Prix in a row. Tim Gajser tried hard to win the second moto but had to settle for second place, finishing the Grand Prix in fourth overall.

Great results for Pirelli in the European Championship too. Team Jtech’s Nick Kouwemberg leads the standings after three rounds in the EMX250 class. The FIM Motocross World Championship will pause next weekend and will resume its run on May 23th-24th from Matterley Basin for the British Grand Prix, round seven of the 2015 calendar.