Pirelli set to supply 3,000 P Zero tyres to over 100 cars at the second round of the Blancpain GT Series Endurance Cup at Silverstone 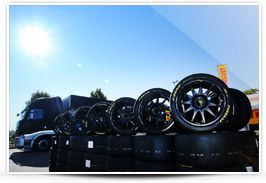 This weekend the Blancpain GT Series Endurance Cup moves to Silverstone in the UK, which is also home to the British Formula 1 Grand Prix. Pirelli will be supporting the Blancpain GT Series Endurance Cup, Blancpain GT Sports Club and the Lamborghini Super Trofeo. This is the second round of the series after the three-hour race at Monza, where tyre strategy proved crucial for the winning Lamborghini team. What's the circuit like? Silverstone or the ‘Home of British Motor Racing’ is based close to Northampton in the United Kingdom and measures 5.891 kilometres with a total of 18 corners. It has been home to the British Formula 1 Grand Prix since 1948, and the current lap record is 1m30.874s set by Fernando Alonso in 2010. Which tyres is Pirelli bringing? Pirelli will bring its P Zero DHD tyre for the provisional Blancpain GT grid of 55 cars, as well as the dedicated P Zero DH slick for the Lamborghini Super Trofeo. Rain is quite possible, so Pirelli will also bring its WH tyre for all categories. What are the most likely race strategies? Like Monza the Blancpain GT race is an endurance competition and lasts three hours, with two pit stops expected. Teams must change tyres and driver: how and when they do this forms the basis of the strategy. Quotes: Matteo Braga, circuit activity manager: “After a taste of British conditions experienced at the Blancpain Sprint round at Brands Hatch last weekend, we move to Silverstone this weekend: a longer and more demanding circuit for both driver and tyre. There teams will have to work hard during free practice to find the perfect balance between performance and consistency: a hallmark of endurance racing, which clearly wasn’t the primary focus at the Brands Hatch sprint meeting, where everyone was just pushing for outright pace.” Qualifying for the Blancpain GT Series Endurance Cup takes place at 09.40 on Sunday 14 May followed by the three-hour race at 14.55. The Blancpain GT Sports Club qualifying race is on Saturday 13 May at 12.05 followed by the main race at 17.30. Qualifying for the Lamborghini Super Trofeo takes place on Saturday 13 May at 09.40 with race one at 15.00 and race two on Sunday at 11.35.

Pirelli set to supply 3,000 P Zero tyres to over 100 cars at the second round of the Blancpain GT Series Endurance Cup at Silverstone