Pirelli Star Driver, a Sammarinese and an Estonian winners of the euro-american area selection

On the podium in Austria Alex Raschi and Ott Tanak. In Dubai in December the last stage of the global selection for promising young Rally drivers

Milan, 20 September 2009 – Sixteen young drivers, sixteen super-cars fitted with Pirelli tyres, asphalt roads and dusty dirt tracks, enthusiastic spectators and masses of adrenalin. These were the ingredients for the last race in Pirelli Star Driver's Euro-American selection, the programme promoted by Pirelli and the FIA to identify and support the new generation of world rally drivers. The stars of the shoot-out, held in Freistadt (Austria) on 18 and 19 September, were the two winners: the Sammarinese Alex Raschi, (22) and the Estonian Ott Tanak (21). The two drivers joined the New Zealander Hayden Paddon, who dominated the selection in the Asia-Pacific area, and the Kenyan Peter Horsey, the African champion. One final driver still has to be chosen to complete the quintet of promising youngsters who will race in a number of WRC rallies next year alongside the "old" champions. This will be the Middle East's promising youngster and the shoot-out will take place at the Dubai Rally, this coming 3-5 December.

In the Austrian competition, Alex Raschi showed excellent driving style and strong competitive abilities. The driver from San Marino is currently leader of the R3 class in the Italian Rally championship; Ott Tanak is known as one of the most promising drivers in global rallying, the undisputed heir of his fellow countryman and driver Markko Martin. Thanks to the qualities they demonstrated, both drivers will take part in six World Rally Championship races next year, in a Mitsubishi Evo X entered by Ralliart Italy. 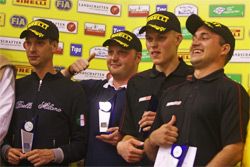 Pirelli Star Driver, a Sammarinese and an Estonian winners of the euro-american area selection