Irishman Craig Breen – one of the six Pirelli Star Drivers selected to contest this year’s inaugural WRC Academy series, which runs on Pirelli tyres – has won the title on the season-closing Rally GB. 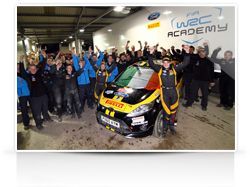 Pirelli is the official tyre supplier to the entry-level class, which pitched 16 young hopefuls together on six asphalt and gravel WRC events this year. They drive identical Ford Fiesta R2s prepared by the British M-Sport organisation. Breen won the class on the Rally GB, his second win of the season, but the result left him tied on points with Estonian Egon Kaur, who claimed the first three rallies of the season. Under the WRC Academy rules, a tie-break is decided by the number of stage wins, and with more stage wins than his rival, Breen was crowned champion. In order to win the title Breen needed to win the event and win as many stages as possible – which is exactly what he did, claiming a 500,000 Euro scholarship prize. “I can’t find words to describe this moment,” said the 21-year-old. “For sure it’s the most amazing feeling to finally get here after all the effort we’ve put in all year, and for it to go down to the last stage of the last rally is incredible. The prize has given me most part of next year’s budget, and I can put my own budget to the following year, so it’s guaranteed two more years in the sport I love. I’m so grateful to Pirelli for this opportunity: what better prize could there be?” As always, the Rally GB was characterised by cold weather conditions with mud and rain: perfect for the debut of Pirelli’s K6 gravel tyre, making its first appearance on the WRC Academy. This tyre is designed to heat up quickly, even in cold weather, and features a tread pattern design that allows it to bite through soft mud and find grip on the firmer surface below. Despite the difficult conditions, the drivers were able to push hard with only two punctures recorded – both the result of heavy impacts with rocks. Rally GB brings to an end a remarkable debut year for the WRC Academy and particularly the six Pirelli Star Drivers – Fredrik Ahlin, Breen, Jan Cerny, Andrea Crugnola, Brendan Reeves and Molly Taylor – who have had the cost of their seasons underwritten in a joint venture between Pirelli and the FIA: world motorsport’s governing body. Pirelli’s motorsport director Paul Hembery said: “It doesn’t get more exciting than this, with the result going down to the last stage of the last rally and the top two tied on points! Both drivers have been very impressive throughout the season, underlining our philosophy of bringing on young talent. Obviously for Craig to win as a Pirelli Star Driver proves the value of this unique scheme that we introduced in collaboration with the FIA in 2008. Rally GB provided a huge challenge again with difficult weather and slippery surfaces, but the drivers adopted the perfect strategy and the tyres were completely reliable. It's not just Craig and Egon who have impressed but all the drivers in the Academy, demonstrating that the future of the sport is in safe hands.” For further information contact: Anthony Peacock +44 7765 896930 anthony@mediatica.co.uk