Italian tyre firm Pirelli is to continue the Star Driver scheme in the British Rally Championship for the fifth consecutive year in 2012, by introducing a new car into the series. 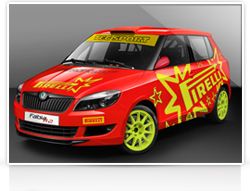 Next year’s Pirelli Star Driver will compete in a Skoda Fabia R2, run by British team TEG Sport – which has fielded the Star Driver entry for the last three seasons. Pirelli has chosen an R2-specification machine to help drivers make the transition from the BRC to the FIA WRC Academy, a support category to the World Rally Championship, which uses the company’s tyres as standard. The Pirelli Star Driver Scheme gives one up-and-coming young driver the chance to have a fully-funded season in the British championship, following a shoot-out and selection process by a panel of experts. Some of the brightest talents in the British Isles have emerged through the ground-breaking scheme, such as two-time British champion Keith Cronin and rising talent Elfyn Evans – who is currently second in the British championship standings. Up to now, the Pirelli Star Driver programme has always used Group N production models, but next year the car will be a brand new Skoda Fabia R2, built to the latest specifications laid down by the FIA: world motorsport’s governing body. The new front-wheel drive car provides a perfect entry level to international competition, putting out nearly 180 horsepower from a 1.6-litre engine, helped by a five-speed sequential gearbox and bespoke suspension. The new Skoda was developed by the factory in the Czech Republic for two years, before being released for sale in March. Carl Naylor, Pirelli Tyre UK’s motorsport manager, commented: “We’re delighted to be continuing the Pirelli Star Driver scheme next year, which has helped so many young drivers find a foothold in the sport in the past, and very excited about introducing a new type of car to the British championship. The way that the structure of international rallying is evolving, with young drivers increasingly learning their trade in two-wheel drive cars – such as the Pirelli-backed WRC Academy on the World Rally Championship – led us to pick the new Skoda Fabia R2 as the perfect car for our 2012 Pirelli Star Driver. Once more, we’re delighted to be working with the TEG Sport team again in 2012, which has consistently demonstrated the high standards of professionalism needed to succeed at this level.” TEG Sport team principal Stuart Newby added: “We’re very excited to be working with Pirelli for a fourth year. Without doubt the Skoda is one of the best cars out there and it was clear from our visit to the factory in the Czech Republic that the engineering is at a very high level. It was important to choose an R2 car to keep the BRC in line with the WRC Academy because we’re seeing more and more Academy drivers doing selected BRC events. ” The selection process for the next Pirelli Star Driver will take place in November this year, with the winner embarking on a full British Rally Championship programme throughout the 2012 season, which is expected to take in seven events. The winner will use Pirelli’s Scorpion rally tyres on gravel and P Zero rally tyres on asphalt, with the Italian firm having been the exclusive supplier to the British Rally Championship since 2006. For further media information please contact: Rebecca Jones, Mediatica, on +44 (0)7545 914 651 or rebecca@mediatica.co.uk Carl Naylor, Pirelli UK, on +44 (0)7974 153 567 or carl.naylor@pirelli.com Julie Naylor, Pirelli UK, on +44 (0)1285 525355 or julie.naylor@pirelli.com List of Pirelli Star Drivers since 2008: 2008: Darren Gass (Mitsubishi Lancer) 2009: Adam Gould (Subaru Impreza) 2010: Keith Cronin (Subaru Impreza) 2011: Elfyn Evans (Subaru Impreza)