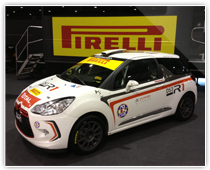 Pirelli is pleased to announce that it will support the new-for-2013 Citroen DS3 R1 Pirelli Rally Academy: a new scheme aimed at offering one young Italian driver the opportunity of a lifetime. With the support of CSAI – the governing body of the Italian motorsport – and Citroen, the scheme will test crews over five asphalt rounds in Italy, many also counting for the highly-competitive Italian Rally Championship. The overall winner will be rewarded with a drive in a Citroen DS3 R3 in the 2014 Italian Rally Championship. The schedule of events for the Academy will include the iconic Mille Miglia in April, the Rally della Lanterna, Rally of Fruili, Sanremo Rally, and will culminate with the legendary Targa Florio. All cars will carry unique Pirelli branding. The Citroen DS3 R1 Pirelli Academy will cost 45,000 Euros, which will include the use of a Citroen DS3 R1. Developed in 2012, the new Citroen DS3 R1 is equipped with a four-cylinder 1.6 direction injection engine. The entry price will also include the use of Pirelli tyres, insurance, media support, catering plus on and off-event support. Drivers aged 25 or under will be given the chance to register with the new series until Monday 25 February. Paul Hembery, Pirelli’s motorsport director commented: “The Citroen DS3 R1 Pirelli Rally Academy is a huge boost for young drivers looking to make their way up in the sport. At Pirelli, we firmly believe in nourishing young talent, which is why we have always been keen to support initiatives such as the Pirelli Star Driver Scheme and the WRC Academy. Last year, we supported Stefano Albertini with a Peugeot 207 S2000 on the Italian Rally Championship: a series we have dominated in recent years. Now in collaboration with CSAI and Citroen Italia, we are delighted to offer another innovative way that offers young drivers access to top-level rallying at a reduced cost, and we are very grateful to both parties for helping to make this unique opportunity happen.” ENDS For more information about Pirelli, please contact Anthony Peacock on +44 (0)7765 896 930 or anthony@mediatica.co.uk