Pirelli will be the sole tyre supplier to the five manufacturers that are aiming to become the first ever winner of the FIA GT World Cup. The event takes place on November 22 next weekend through the streets of Macau. The inaugural FIA GT World Cup has attracted a strong 24-car line-up of GT3 machines. The showdown will take place with a 12-lap qualification race on Saturday November 21 and then the World Cup will be decided with an 18-lap (91.8-kilometre) race around the famous Guia Circuit in Macau the next day. Heading the entries is Le Mans 24 Hours winner Earl Bamber. The New Zealander won the French classic earlier this year with the Porsche team, and he’ll be driving a Pirelli-shod 911 997 GT3R for the LKM Racing team. LKM has won the Macau GT Cup twice. 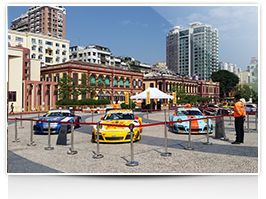 Two-time Macau Grand Prix winner Edoardo Mortara is another frontrunner. He will drive an Audi R8 LMS for the Audi Sport Team Phoenix squad, and as with all the cars he too will be racing on Pirelli tyres. Andre Couto, who won the Macau Grand Prix in 2000, will aim to beat his rival in a McLaren 650S GT3. Other entrants have won the Macau GT Cup, including German driver Marco Engel, who will tackle the tight street course in a Mercedes-Benz SLS AMG GT3, and Darryl O’Young, who will be at the wheel of an Aston Martin Vantage GT3. Japanese ace Keita Sawa will race a Bentley Continental GT3 and is also a Macau GT Cup winner. Collectively they represent Aston Martin, Audi, McLaren, Mercedes-Benz and Porsche – a stellar line-up of the manufacturers of some of the most prestigious cars on the market. The top two cars from each manufacturer will accrue points and the marque with the most will win the inaugural FIA GT World Cup. Some teams are not eligible for manufacturer points, and that includes the two Ferrari 458 Italias entered by GT stalwarts AF Corse and another 458 Italia from Asian Clearwater Racing. The 6.2-kilometre Macau Guia GP circuit, which has helped to propel iconic drivers such as Ayrton Senna, Michael Schumacher and Sebastian Vettel onto the world stage, has a unique history and atmosphere. A lap on the Guia track leaves no room for mistakes between the uncompromising Armco barriers squeezed amongst luxurious five-star hotels and sleepless casinos in the Las Vegas of Far East. In the past 62 years, the city around Guia has evolved beyond recognition, but the width, layout and fundamental character of the iconic track remains. Each car will be allowed to run five sets of tyres over the weekend. Matteo Braga, Pirelli’s senior tyre engineer, said: “Pirelli is very excited to be a part of this new event and we are particularly thrilled to see such a strong entry list. There is a long list of impressive cars from some of the world’s top car manufacturers. We will supply them all with our P Zero DHC slick tyre, with a single compound for the whole grid. The circuit is unique in that it has long straights and some very tight corners. So the tyres will be tested under braking and they will withstand some large loads as the cars reach maximum speed at the end of the straights, although wear and degradation is generally low. The track is particularly narrow too, so the drivers will aim to be precise as they negotiate the corners. A rapid warm-up is required on a track that’s always going to be very slippery. We don’t often see GT racing on street circuits, so this is sure to be a fantastic spectacle.”