Jonathan Rea of the Kawasaki Racing Team in WorldSBK and Patrick Jacobsen of team MV Agusta Reparto Corse in WorldSSP are the fastest in the pre-season official testing, prelude to the first round of the 30th edition of the Championship for factory derivative bikes

Next weekend, as per tradition, the Phillip Island circuit in Australia will provide the backdrop for the first round of the MOTUL FIM World Superbike Championship which reaches the milestone of its 30 th edition this year, the last fourteen of which with Pirelli as Official Sole Tyre Supplier for all the classes.
For the first round of the season, only the WorldSBK and WorldSSP riders will be involved and, like every year, it was preceded by the pre-season official tests which play a very important role since the first round also coincides with what is, without a doubt, the most demanding track on the calendar for the tyres.

At the end of the two days of tests, the fastest rider in the WorldSBK class was Jonathan Rea on his Kawasaki Racing Team Kawasaki ZX-10R, stopping the clock at 1’30.545 for his best time. In WorldSSP, the fastest rider was Patrick Jacobsen (MV Agusta Reparto Corse) in 1’33.688.
It should be pointed out that the tests were partially compromised by the brief but frequent showers that drenched the track, conditioning the available test sessions for the riders.

The race solutions for the WorldSBK class:

The options available to the riders for the race weekend are the ones tried on the test days, with the addition of two other rear solutions.
There will be a total of seven slick solutions that the riders will be able to use, three front and four rear, plus the super soft qualifier which, however, can only be used in the second Superpole ® session.
As for the front, in addition to the S1699 SC1 development solution, very popular with the riders, as well as the most used front solution in the 2015 and 2016 seasons, the standard SC1 and SC2 will also be available. 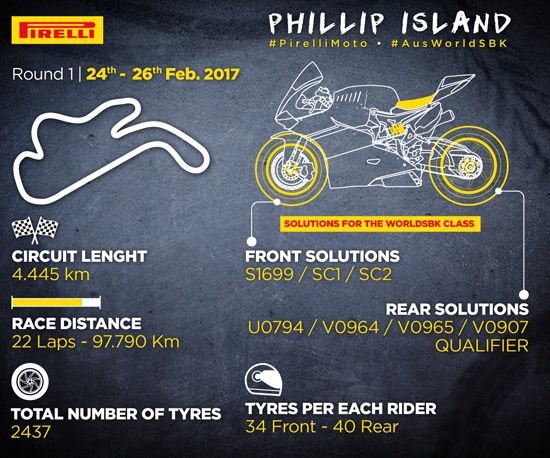 There will be four rear options and all in SC1 development compound: two were also seen in action during the tests, whereas two are completely new to the riders. The ones used during the tests are the U0794, the preferred solution in 2016 that was used last year by 18 out of 23 riders in Race 1 and 20 out of 22 in Race 2, and the V0964, thermally more stable than the U0794 and able to guarantee more consistent performance for full race distance. The alternatives that were not present for the tests are the V0965 and the V0907. The former is a further development of the U0794 but compared to the previous options it should guarantee greater grip. The latter uses the same compound as the U0794 but with some different structural measures intended to offer a higher level of grip and greater stability.

The race solutions for the WorldSSP class: 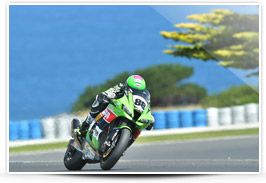 In this class, the riders will be able to count on three front and two rear solutions. The V0533 SC1 development solution will be available for the front after making its début in 2016 on the Lausitzring and subsequently also used at Magny-Cours, Jerez and Losail, as well as the standard SC1 and SC2.
For the rear, in addition to the U11489 SC1 development solution in the larger 190/60 size, already seen in action during the tests and the favourite for the 2016 race, a second and new option will also be available, the V0966, also 190/60, that uses the structural base of the U1149 but with a compound intended to improve thermal stability and some measures that should provide a better level of grip and greater stability.

More details on the race solutions for the WorldSBK and WorldSSP classes are available in the documents attached to this press release.