Pirelli to bring almost 6,000 tyres to Paul Ricard for latest round of the Blancpain GT Series Endurance Cup

This weekend Pirelli travels to Paul Ricard in France with the Blancpain GT Series for round three of the Endurance Cup. This event is the last race before the Spa 24 Hours and with it lasting six hours it is a real opportunity for the teams to fine tune their cars and strategy ahead of the big event at the end of July. What's the circuit like? Paul Ricard is located near Marseille in France and is 5.842 kilometres in length with 13 corners. Opened in 1970 it has hosted a variety of championships including Formula One. 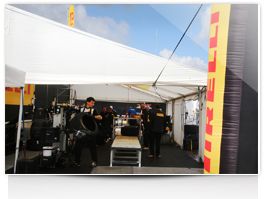 Which tyres is Pirelli bringing? Pirelli will bring its P Zero DHD tyre for the provisional Blancpain GT grid of 61 cars and provisional Blancpain GT Sports Club grid of 23 cars, and for wet conditions the WH tyre will be available. This DHD tyre has been designed to work with every car on the grid, which includes 22 Ferraris, 18 Mercedes and 17 Lamborghinis as well as other prestige manufacturers. The variety of car types – with their engines variously in the front, middle and rear – and weight distributions means that the DHD’s versatility is both tested and proven at every circuit. Pirelli will also be supplying the full Lamborghini Super Trofeo grid with its P Zero DH tyre. What are the most likely race strategies? With the race lasting six hours it’s a crucial test of teamwork, reliability and strategy. The Championship regulations limit the stint lengths to a maximum of 65 minutes (or up to 70 minutes if the Safety Car is on track when the car is due to pit), which effectively turns the race into six sprints - but with a twist. If teams are able to maximise their first five stint lengths then they could be in a position to run a shorter, flat out final stint to the chequered flag. But the track is likely to become faster as the circuit cools during the evening, so slightly shorter stints in the hot conditions early in the race may help take advantage of the extra grip after sunset. It’s certain, however, that with around 60 cars on track one of the biggest keys to success will be timing the pit stops to avoid exiting the pits in heavy traffic. Quote: Matteo Braga, circuit activity manager: “Six hours of racing at Paul Ricard will give the teams the opportunity to study strategies for the 24-hour race at Spa next month. Ricard is a high severity circuit, the long Mistral straight requires high speed but also good downforce and mechanical grip to carry speed in long corners such as Signes. Temperatures are likely to be high and teams have to compensate for differences between day and night without having a real night practice session.” Qualifying for the Blancpain GT Series Endurance Cup takes place from 10.00 – 11.00 followed by the six-hour race at 18.00 on Saturday 24 June. Lamborghini Super Trofeo qualifying is at 09.00 followed by race one at 14.30 on Saturday 24 June, race two is at 13.35 on Sunday 25 June.

The qualifying race for the Blancpain GT Sports Club is on Sunday 25 June at 10.50 followed by the main race at 15.35.

Pirelli to bring almost 6,000 tyres to Paul Ricard for latest round of the Blancpain GT Series Endurance Cup
Newsroom