After the successful debut of its soft compound tyres in Valencia, Pirelli heads to Silverstone for the British Grand Prix where it will equip Formula One’s feeder categories, GP2 and GP3, with its P Zero medium compound and P Zero hard compound tyres respectively. Silverstone is well known for being a fast and demanding circuit characterised by high lateral loads and an abrasive surface. Its mix of corners makes it a good test not only of the abilities of car and driver but also of the tyres. Adding to the challenge is the variable and unpredictable weather, which this venue experiences even in summer. 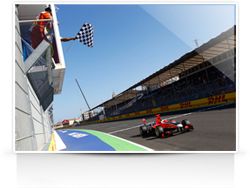 Pirelli’s Racing Manager Mario Isola explained: “At Silverstone we will take up the challenge of bringing our GP2 medium and GP3 hard compounds to spice-up the action and meet the expectations of the series’ organisers. Specifically, the tyre choice for GP2 is a daring decision. Tyre management will be a key factor because the drivers will have to take extremely good care of their tyres if they want to be competitive and give a hard time to their rivals.  Generally speaking, we foresee a different result in terms of tyre wear in comparison to that experienced on other circuits. Silverstone has a significant combination of lateral and longitudinal loads. This is likely to result in the tyres wearing out in an even way instead of mostly in the inner part of the cover, as in Valencia, because of the camber effect.” Pirelli will equip GP2 drivers with its P Zero medium slicks, which is the best compromise to ensure tyre durability along with the necessary levels of degradation to increase on-track action. This tyre compound was brought to the British track during pre-season tests to assess its performance and to determine whether it would be a good option for racing. While GP2 drivers have already gained some good experience with the P Zero medium compound at different venues, at Silverstone the situation will be more difficult because they will have to pay close attention to their tyres. GP2 driver Sam Bird (iSport International) commented: “The medium compound is a tyre on which you can push for an ultimate one-off lap time and will last for anywhere between 10 to 20 race laps, depending on the track, before dropping away and becoming difficult to manage. I believe Pirelli have done a superb job on their compounds and I look forward to driving the medium tyre again at Silverstone. At Silverstone the tyre should make the racing very exciting. Nobody knows exactly how long a set of slicks will last so for sure it's going to be a learning curve for everybody as Silverstone is a fast and flowing circuit, unlike some of the tracks we have just visited.” GP3 drivers will use P Zero hard covers, which are quite similar to the GP2 medium compound slicks in terms of tyre durability. The GP3 hard slicks supplied by Pirelli from this season are slightly different from those used in 2010 because a higher degree of artificial tyre degradation has been added to the new rubber. As a result it is closer to last year’s medium compound tyre in terms of durability levels. On Friday 8 July, the GP3 drivers will take part in two practice sessions while the GP2 drivers will complete a single practice and qualifying session. On Saturday 9 July, GP3 drivers will complete their qualifying session in the morning, followed by the GP2 feature race at 15:40 and the first GP3 race at 16:20 local time. Before the British Formula One Grand Prix gets underway on Sunday 10 July, the second GP3 race will take place at 8:20, followed by the GP2 sprint race at 10:25. The GP2 drivers will cover 29 laps in Saturday’s race and 21 laps in Sunday’s race, while both GP3 races will last for 17 laps of the 5.901-kilometre Arena circuit layout. For further information please contact: Laura Bartoli on +44 7500 877304 or laura@mediatica.co.uk