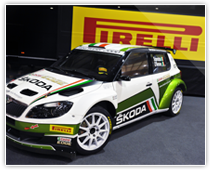 Pirelli will equip the official Skoda Italia entry on the Italian Rally Championship this year, which will be driven by up-and-coming talent Umberto Scandola. This completes Pirelli’s domination of the Italian Rally Championship, where the Italian firm has lifted the title for past four years, thanks to Peugeot Italia and Paolo Andreucci – who this year will field a Pirelli-equipped 208 R2 car at the start of the season, before switching to an R5 later in the year. In recent years, Scandola has often been Andreucci’s closest competitor, ensuring that the scene is set for a fantastic show on the demanding Italian stages in 2013. The Italian Rally Championship takes in eight rounds this year, starting with the Ciocco Rally in March and ending with the legendary Sanremo Rally in October, which is also part of the European Rally Championship. The drivers, now including Scandola’s Skoda Fabia Super 2000, will have the full range of Pirelli’s latest asphalt and gravel rally tyres available to them this year – developed using the lessons learned from 2008-2010, when Pirelli was sole supplier to the World Rally Championship with a failure rate of less than 0.02%. The rally tyres are conceived at Pirelli’s research facilities in Italy and then built at the cutting-edge ‘factory of champions’ in Izmit, Turkey: just like the Formula One tyres that have helped to spice up the show at the pinnacle of single-seater racing over the last two years. Pirelli’s motorsport director Paul Hembery commented: “We’re delighted that Skoda has appreciated the qualities of our tyres and chosen to use our tyres on the Italian Rally Championship: a series that is historically extremely important to us, as it contains a wide variety of gravel and asphalt conditions that allows us to effectively showcase the adaptability, strength and performance of our tyres in our domestic market. Umberto Scandola and Skoda Italia have been a serious threat for the championship in recent years, and we are confident that our most recent tyre supply agreement will allow them to step up their challenge even further, which is great news for all the fans. With Andreucci not in a position to challenge for overall wins at the start of the season, it was important for us to underline our philosophy of supporting young drivers who are capable of going all the way to the top.” ENDS For more information about Pirelli, please contact Anthony Peacock on +44 (0)7765 896 930 or anthony@mediatica.co.uk