Pirelli to invest in Argentina 100 million dollars by 2013

PIRELLI CONSOLIDATES PRESENCE IN ARGENTINA, TO INVEST100 MILLION DOLLARS BY 2013 IN MERLO FACILITY

ANNUAL PRODUCTION CAPACITY TO GROW TO OVER 6 MILLION UNITS A YEAR (FROM 5 MILLION), WITH FOCUS ON SUV AND LIGHT TRUCK SEGMENTS

Pirelli is consolidating its position in Argentina and will invest 100 million dollars at its Merlo facility, in the province of Buenos Aires, by 2013.

The development plan for Pirelli in Argentina, where the group’s activities began 100 years ago, was illustrated at a press conference held today in Merlo, with the participation of Argentinian President Cristina Fernández de Kirchner, the Governor of Buenos Aires Province Daniel Scioli, Industry Minister Débora Giorgi, Foreign Affairs Minister Héctor Timerman, Labour Minister, Carlos Tomada, Italian Ambassador to Argentina Guido Walter La Tella, the Mayor of Merlo, Raúl Othacehé, the Chairman and CEO of Pirelli, Marco Tronchetti Provera, the CEO of Pirelli Tyre, Francesco Gori, the CEO of Pirelli Pneus America Latina, Guillermo Kelly, and the Chairman of Pirelli Neumáticos Argentina, Franco Livini. The plan, aimed at increasing production capacity and strengthening Pirelli’s leadership in LatinAmerica, is part of the Company’s international expansion strategy which, in recent years, has seen it progressively increase its direct industrial presence in markets offering the highest rate of growth, as well as competitive costs. Of the 20 production sites that make up Pirelli’s industrial universe, seven facilities are located in South America (one in Argentina, five in Brazil, one in Venezuela) and generate 36% of Pirelli Tyre’s total sales, with an output covering all segments: car, industrial vehicles, motorcycles, agricultural and worksite machinery. The Merlo factory, where Pirelli has operated since 1951, produces over 5 million units annually for the entire car, SUV and light truck range and today accounts for 10% of the group’s total production in Latin America and 20% of car tyre production in the area. Strengthening its presence in Argentina, in particular, guarantees Pirelli an important base from which to satisfy both increasing internal market demand, which will absorb about 50% of production, and demand from significant export markets, principally Brazil and the other South American markets and the USA. Among its clients, the factory counts the major car makers Volkswagen, GM, Fiat, Ford, Peugeot, Iveco and soon also Toyota. The 100 million dollar investment foreseen by 2013, of which about 20 million dollars will be spent this year, will go to technological and quality improvements, as well as increasing capacity, which is estimated to rise to over 6 million units annually by the end of the period, an increase of over one million units from the present 5 million. In particular, the increase in production capacity will entail the doubling of production in the high value added SUV and light truck segments which typify the Argentine auto market. In the context of defining the product compounds and consistent with Pirelli’s strategy of ever greater commitment to the development and production of ‘green performance’ products, in 2011 the Company will install a new process for the production of compounds which will bring the production of low environmental impact tyres to 50% of total production. The production area today covers 48,000 square metres which, by the end of the period, will grow to 60,000 square metres. Overall, the investment plan will generate 300 new jobs over time, reaching a total of 1,200 employees compared with around 1,000 in 2010 and 900 in 2009. By the end of 2010, Pirelli’s sales in the country are expected to grow by 55% to 365 million dollars and the target for 2013 is 500 million dollars. This compares with 235 million dollars last year. 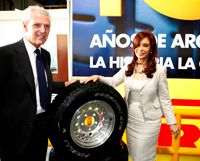 After the slowdown in 2009, the Argentine car market is experiencing an increasing dynamism linked to the performance of the internal market where some leading car makers – Ford, Renault, Volkswagen, Toyota, Peugeot, Mercedes and Honda among them – are launching new projects, as well as demand from nearby markets beginning with Brazil which absorbs a large part of local production. According to data released by the national association of car producers (Adefa), moto vehicle production in the first nine months of 2010 exceeded 500,000 units, with a growth of 50% compared with the same period in 2009. At years end, according to sector estimates, production could surpass 650,000 units (513,000 in 2009). Today, car production today represents more than a third of Argentina’s industrial growth and 34% of manufacturing sector exports. Pirelli’s leadership and brand penetration in the Argentine market are proof of consumer appreciation and in 2010, for the third consecutive year, the Company won the ‘Marcas Confiables’ prize. This is awarded to companies with the greatest reliability according to studies carried out annually by the magazine Selecciones. 100 years in Argentina Pirelli’s activities in Argentina began 100 years ago and Pirelli Argentina was born in 1910 when the Group, then involved in the sale of rubber goods made in Milan, participated in the Buenos Aires Expo. At the end of 1917 “Pirelli Platense” began operations. With 24 workers, it was the Pirelli group’s first company in the Americas. In 1921, it began producing cables in the Donato Alvarez plant in Buenos Aires. A leap in scale occurred in 1929. Pirelli had already bought land on the outskirts of the capital to build an electric cable factory: the “La Rosa” plant. In the same year a small rubber factory was acquired and incorporated into the same plant. The “La Rosa” plant was further extended with the construction of a new factory and the broadening of activities to include shoes made of rubber and cloth. Having become Industrias Pirelli Saic in 1948, Pirelli Argentina acquired a factory in Bella Vista, outside Buenos Aires, in 1956 to house all its rubber processing, both for the cable sector and diversified products. In 1968, with the acquisition of 100% of the Coplan company, of which it had held 50% since 1951, Pirelli began the direct in-country production of tyres at Merlo, where the Group’s Argentine plant, after years of expansion and job creation, is still located. The centenary of the Company’s presence in the country will be celebrated today with the inauguration of the exhibition ”Pirelli 100 años de Argentina” and a gala dinner with the participation of the Italian Ambassador to Argentina, Guido Walter La Tella and representatives of the country’s industrial establishment, as well as Pirelli’s top management.

Pirelli to invest in Argentina 100 million dollars by 2013
Newsroom