Pirelli, the sole tyre supplier to the GP2 and GP3 Series, will bring its P Zero GP2 medium tyres to the 2011 GP2 Final in Abu Dhabi, a stand-alone event held at the Yas Marina Circuit during the same weekend as the Formula One Grand Prix (11-13 November). On this occasion, the Italian tyre manufacturer will reward the two top GP3 graduates competing against the GP2 regulars with a cash prize. 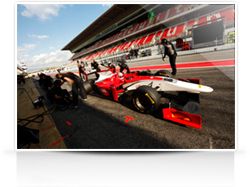 The 2011 GP2 Final will take place on Yas Marina’s 4.730-kilometre track, which features a challenging combination of 21 corners, several long straights and tight chicanes. The layout puts the onus on race strategy due to the limited overtaking opportunities available and tyre use plays a key role in this.
All 13 GP2 Series teams will take part in this unique event, with a full grid of 26 drivers lining up. Currently there are five graduates from the Pirelli-backed 2011 GP3 Series: James Calado (Lotus ART), Tom Dillmann (iSport International), Antonio Felix da Costa (Ocean Racing Technology), Rio Haryanto (Dams), Nigel Melker (Dams). Other GP3 graduates may be confirmed during the coming days.
Pirelli will reward the two highest-placed GP3 drivers who finish in the points in the feature race and/or sprint race. The GP3 driver scoring the most points will receive 15,000 Euros with the second highest scoring GP3 driver receiving 10,000 Euros.
The P Zero GP2 medium slick Pirelli will bring to Abu Dhabi was also supplied for the GP2 Asia pre-season tests and races held back in February. Being a highly versatile product, Pirelli’s P Zero medium compound rubber was also used successfully during the 2011 GP2 rounds in Istanbul, Silverstone and Spa-Francorchamps.
Pirelli’s Racing Manager Mario Isola commented: “We are bringing our P Zero GP2 medium slicks to Abu Dhabi as they are very well suited to the challenging layout of the Yas Marina track. Our medium slicks have already been used on this circuit during the 2011 GP2 Asia pre-season tests and races in February when they provided sufficient durability and high levels of grip. That was also when the GP2 teams had their first taste of the new Pirelli rubber. At the beginning they struggled a bit to understand the behaviour of the medium compound but, after having completed a whole season running on our P Zero GP2 rubber, they now know how to handle the tricky variable durability features incorporated into the design to encourage tyre management and race strategy. It will be interesting to compare the results in February with those we will collect during the 2011 GP2 Final and see the improvements made after nine months.”
The 2011 GP2 Final follows on from two recent test sessions in Spain at Jerez (28-29 September) and Barcelona (19-20 October) where Pirelli provided an enhanced version of its P Zero GP2 hard compound tyre, which features greater performance and consistency. The new tyre successfully completed over 25.000 km of testing and is likely to be used during the 2012 GP2 season.
The Abu Dhabi event will feature a single free practice, a single qualifying session and two races: the feature race, which includes a compulsory pit stop and the sprint race. Race one will take place on Saturday November 12 at 11:00. Race two is scheduled for Sunday November 13 at 13:30. Practice and qualifying will take place on Friday November 11 at 10:10 and at 14:55 respectively. All timings are GMT +4hrs.
***
For further information please contact Laura Bartoli on +44 7500 877 304 or laura@mediatica.co.uk