Pirelli will be exclusive tyre supplier to the FIA GT World Cup at Macau’s famous Guia circuit from November 16-19 for the third consecutive year.

The FIA GT World Cup is an annual blue riband event for GT competitors across the world that features several prestige marques, most of which rely on Pirelli for original equipment. Once again, they will also be competing with Pirelli P Zero tyres on the race track, underlining the link between the road and competition product.

Only manufacturer-supported cars and professional drivers (gold and platinum standard) will be admitted to the FIA GT World Cup this year, ensuring the highest level of competition. Pirelli will also award the ‘Speed Hero’ prize for the first time, to the driver who sets pole position.

Competitors will race on the same P Zero tyre used in the many GT championships to which Pirelli is sole tyre supplier all around the world. 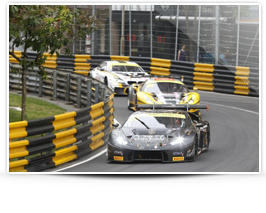 Last year’s race made history when the eventual winner, Laurens Vanthoor, was classified first despite ending the race on his Audi’s roof. He returns this year with Porsche, while 2017 Blancpain GT champions Mirko Bortolotti and Robin Frijns line up with Lamborghini and Audi respectively.

A number of other previous winners in Macau will take part, including Edoardo Mortara, Daniel Juncadella and Maro Engel with Mercedes, Lucas di Grassi in an Audi and Felix Rosenqvist in a Ferrari. BMW is also represented, as is Honda with its new NSX GT3.

Pirelli’s head of car racing Mario Isola commented: “Having supplied one of the highlights of the GT calendar since the very start – an event that is truly worthy of the name ‘World Cup’ – we’re delighted to return to the iconic Macau circuit, reinforcing our growing presence in the Asia Pacific region. With Macau being a street circuit, a relatively unusual type of track for GT cars to race on, this again highlights the close links between our ultra high performance road and track products; both created for the same base models of car.”

For further information about Pirelli, please contact Anthony Peacock on anthony@mediaticaworld.com or +44 7765 896 930