Pirelli to supply FORMULA ONE for the next 3 years Following the decision by the World Motor Sport Council, Pirelli and the FIA have renewed their tire supply contract for the FIA FORMULA ONE WORLD CHAMPIONSHIP, confirming the Italian company as sole supplier for the next three years. This year competition will be characterised by important technological progress as the new 1.6L V6 Turbo engine and new energy recovery system which will be working with  considerably less fuel at disposal and new aerodynamic parameters. Pirelli has therefore completely renewed its 2014 tire range, using simulation technology, the information provided by the teams and on-track testing results.  All 2014 racing slicks features a new construction and a slightly harder compound, in order to maximize the grip.  Each rear tire now weighs 250 grams more and each front tire 200 grams more than last year. Front tires benefits from a redesigned profile while the rear profile remains unaltered.  Pirelli’s Cinturato Blue full wet tires have a new rear tread pattern, in order to avoid aquaplaning, by increasing dispersed water at full speed from around 60 litres to 65 litres per second.  The compound of wet tires has also been modified to enhance performances in both damp and dry conditions, increasing the crossover point to the intermediate tires. The world motorsport's governing body and Pirelli, in collaboration with the teams, have been working together to improve levels of safety and performance in Formula One competitions.  To this end, important changes to the FIA FORMULA ONE Sporting Regulations regarding the testing of tires have been introduced and they will enable the Italian firm to continue its FORMULA ONE single supply arrangements, in the best interests of all stakeholders. These new rules, mandatory from the season 2014 onwards, can be summarised as follows: one of the 12 days of official pre-season testing, as prescribed in the 2014 Sporting Regulations, will be dedicated exclusively to wet tire testing; each team will dedicate one of their eight days of in-season testing exclusively to tire testing, as already prescribed in the 2014 Sporting Regulations. This means that during each of the eight days of in-season testing, at least one team - and up to a maximum of two - will be concentrating on tire testing along with Pirelli's engineers. The first pre-season testing have already taken place in Jerez de la Frontera from January 28th to 31st, while additional testing are scheduled in Bahrain from February 19th to 22nd and from 27th to March 2nd. 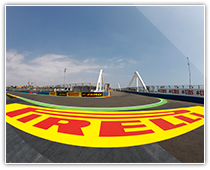 Pirelli will continue to determine the specification of the tires and to manage all aspects of their development, in close cooperation with the FIA and the teams, and within the parameters set out in the FIA FORMULA ONE Sporting & Technical Regulations. In addition, Pirelli and the FIA have agreed to discuss a possible partnership on the FIA Action for Road Safety campaign.

Pirelli to supply FORMULA ONE for the next 3 years
Newsroom