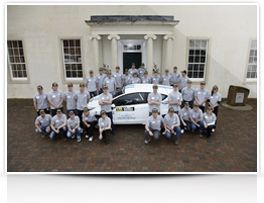 Pirelli will renew its commitment to developing the next generation of driving talent when the new-for-2011 FIA WRC Academy gets underway on Vodafone Rally de Portugal next week (March 24-27). The Italian company, which celebrated the completion of its three-year tenure as the official tyre supplier to the World Rally Championship last November, will provide its K4 and K6 gravel tyres and RX and RE asphalt tyres to the 20 young hopefuls and their co-drivers, who represent 14 different countries from around the world and who will pilot identical M-Sport Ford Fiesta R2s on six rounds of the WRC this season. In addition, Pirelli will continue its support of the Pirelli Star Driver programme for a third successive season with six emerging competitors – Fredrik Ahlin (Sweden), Craig Breen (Ireland), Jan Cerny (Czech Republic), Andrea Crugnola (Italy), Brendan Reeves (Australia) and Molly Taylor (Australia) – being chosen by a panel of experts to contest the WRC Academy. Pirelli and the FIA, motorsport’s world governing body, have underwritten the cost of their campaigns. Paul Hembery, Pirelli’s motorsport director said: “At Pirelli, we’ve been involved in the World Rally Championship since it was created in 1973, so I’m delighted that we’re able to continue this association in 2011 through the Pirelli Star Driver scheme and the WRC Academy. We’ve always believed in supporting the careers of young drivers, and our rally programme this year puts us in a unique position to help uncover the champions of tomorrow. “The concept of the WRC Academy is an excellent one as it puts the emphasis firmly on driving talent. We’ve seen some great battles in Portugal in the past, and with these young drivers all eager to establish their reputations, I’m sure it will be exactly the same again this year.” WRC Academy drivers will only take part on the first two days of each event and will spend the final day of the rally analysing their respective performances in a debrief session. Various other training seminars and workshops will take place during the course of the season to give the drivers the knowledge needed to take the next steps in their careers. Pirelli has developed versions of the K4 and K6 tyre specifically to suit the Fiesta R2. Based on the vastly successful Scorpion cover, the K4 and K6 WRC Academy tyres are lighter than the existing Scorpion with a focus on performance rather than outright durability. However, their resistance against punctures has not been compromised. The medium compound K4 tyre has been earmarked for the gravel events in Portugal, Sardinia and Finland. The soft compound K6 will serve competitors on Wales Rally GB in November to cope with the colder ambient temperatures and possibility of rain. The RX tyre for dry asphalt and the RE tyre for wet asphalt will be made available for the sealed-surface rounds in Germany and France. WRC Academy competitors will be limited to 18 tyres for each event, including the pre-rally test session that will take place prior to each round. Pirelli’s senior rallying tyre engineer Matteo Braga explained: “We never had an issue with tyre wear on the Fiesta last season. But because we expect the level of competition to be higher this year with so many young drivers taking part, tyre strategy and the conserving of tyres will become one of the things drivers will be able to learn in the WRC Academy. This is important for their long-term career development.” Braga will be joined by a team of 10 Pirelli personnel on each WRC Academy event, including two technicians from a Pirelli tyre service centre located close to the base of each round of the series. 2011 FIA WRC Academy entrants 100 Carl Ward (Sweden)/Morten Abrahamsen (Norway) 101 Alastair Fisher (Great Britain)/Daniel Barritt (Great Britain) 102 Jose Suarez (Spain)/Candido Carrera (Spain) 103 Andrea Crugnola (Italy)/Roberto Mometti (Italy) 104 Jan Cerny (Czech Republic)/Pavel Kohout (Czech Republic) 105 Miko-Ove Niinemae (Estonia)/Timo Kasesalu (Estonia) 106 Brendan Reeves (Australia)/Rhi Smyth (Australia) 107 Sebastien Chardonnet (France)/Thibault de la Haye (France) 108 Egon Kaur (Estonia)/Mait Laidvee (Estonia) 109 Craig Breen (Ireland)/Gareth Roberts (Great Britain) 110 Yeray Lemes (Spain)/Rogelio Penate (Spain) 111 Victor Henriksson (Sweden)/Joel Ardell (Sweden) 112 Sergey Karyakin (Russia)/Natasha Potapova (Russia) 113 Miguel Baldoni (Argentina)/Fernando Mussano (Argentina) 114 Fredrik Ahlin (Sweden)/Hakan Jacobsson (Sweden) 115 Molly Taylor (Australia)/Rebecca Smart (Australia) 116 Christian Riedemann (Germany)Michael Wenzel (Germany) 117 Philipp Knof (Germany)/Henry Wichura (Germany) 118 Timo van der Marel (Netherlands)/Erwin Berkhof (Netherlands) 119 Matteo Brunello (Italy)/Michele Ferrara (Italy) 2011 FIA WRC Academy calendar Round one: Vodafone Rally de Portugal, March 24-27 Round two: Rally d’Italia-Sardegna, May 5-8 Round three: Neste Oil Rally Finland, July 28-31 Round four: ADAC Rallye Deutschland, August 19-21 Round five: Rallye de France, September 29-October 2 Round six: Wales Rally GB, November 10-13