Pirelli to underline its tyre durability at the Nürburgring 24 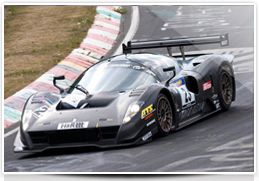 Pirelli will resume its participation in endurance racing when it contests the gruelling Nürburgring 24 Hours in Germany from 25-26 June providing highly resistant tyres with enhanced durability. The Italian firm will equip several touring and GT cars with its P Zero racing tyres, including the new prototype P4/5 Competizione of Scuderia Cameron Glickenhaus. With over a century of involvement in motorsport activities, Pirelli has always distinguished itself for designing products which are perfectly in line with the specific needs of the type of competition they have been developed for. While its P Zero Formula One tyres have been specifically designed to have variable and controlled durability features, those developed for endurance racing are characterised by strong resistance and extremely high durability, which are vital for events such as the Nürburgring 24 Hours. Pirelli has been involved in endurance racing for many years supplying its P Zero tyres to some of the most prestigious events on the calendar in Europe and in the Unites States, including several editions of the Le Mans 24 Hours, the 24 Hours of Spa, the Daytona 24 Hours and the 12 Hours of Sebring. At Nürburgring next weekend, Pirelli will supply its covers to a wide variety of touring and GT cars competing in several different classes, such as BMW’s Z4 GT3, Z4 Coupe, M3 GT4 and MINI models as well as the Porsche 997 Cup and Porsche Cayman, the 135d Phantom and Volvo’s C30 cars. Pirelli tyres will also be used on the P4/5 Competizione car developed by Scuderia Cameron Glickenhaus. Eligible for the EXP1 class, the prototype is based on the Ferrari 430 Scuderia and has received technical support from Pirelli’s engineers during its preparations for the Nürburgring race. As the P4/5 Competizione is a bespoke project, Pirelli has worked in close cooperation with the team during tests and VLN races to develop a tyre specific to the car. It has also assisted the drivers – Luca Cappellari, Fabrizio Giovanardi, Nicola Larini and Mika Salo – in making the right tyre choice for the event. The tyres that will be fitted to the P4/5 Competizione car at Nürburgring are an improved version of Pirelli’s P Zero racing rubber and have been designed to provide maximum endurance and reliability during the race, covering a stint of approximately 230 kilometres which is the average distance a set of tyres can be used for. Pirelli will supply three different types of tyre for the Nürburgring 24 Hours: two slick compounds designed for dry surfaces (soft and hard), a single intermediate tyre for mixed or humid conditions and a wet tyre and for wet surfaces. The dimensions of each tyre are 325/650–18 at the front and 325/705-18 at the rear. Pirelli’s Motorsport Director Paul Hembery commented: “At Pirelli we are very keen on supporting new projects because we enjoy being involved in new challenges from which we can always learn something and improve the quality of our racing and road products. Each type of racing tyre we design is specific to the characteristics of the competition they have been developed for. Cars competing in endurance racing need to be equipped with a consistent product with strong durability features, whereas our Formula One, GP2 and GP3 tyres have been designed to have variable durability features, as requested by the organisers to spice-up on-track action. “When racing at the Nürburgring 24 Hours, a tyre with good grip and excellent endurance is needed in order to provide a good balance between resistance and high performance levels over a stint that can be up to 230 kilometres. For this year’s edition, we will bring an improved version of our P Zero tyres, which has been specifically developed for the P4/5 Competizione prototype. The new tyre will provide higher durability and performance in track conditions that are likely to be cold especially at night and low in terms of grip.” The Nürburgring 24 Hours will take place on the long track configuration, which comprises the grand prix circuit and the older north loop. With a lap length of 25.359 kilometres, more than 200 cars are permitted to take the start. And with the first five VLN races at the Nürburgring being won by a factory-entered BMW, a GT3-class Mercedes SLS, a new Ferrari 458, a Hybrid Porsche GT3 and an Audi R8 LMS, at least five different brands are expected to challenge for the overall win.

For further information please contact Laura Bartoli on laura@mediatica.co.uk  or +44 7500 877304

Pirelli to underline its tyre durability at the Nürburgring 24
Newsroom