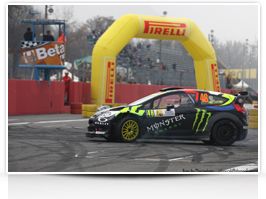 As well as another Formula One world title for Sebastian Vettel last weekend, Pirelli also put in a stellar performance in rallying with two drivers who are more commonly associated with other disciplines: Valentino Rossi and Robert Kubica.

Rossi, the most successful man on two wheels, won the Monza Rally Show in Italy for the third time. ‘The Doctor’, driving a specially-liveried Ford Fiesta WRC, led an all-Pirelli podium ahead of former Le Mans winner Dindo Capello (Citroen DS3 WRC) and Italian Championship frontrunner Piero Longhi (Citroen C4 WRC). Pirelli also completed a clean sweep of the Super 2000 podium on the Monza event, with multiple Italian champion Paolo Andreucci (Peugeot 207 S2000) leading home Luca Rossetti – who won the Turkish Rally Championship this year with Pirelli and Skoda – and Stefano Albertini. On top of that, Pirelli won the R3T category with Andrea Crugnola and the R3C category as well with a new Pirelli-backed 16-year-old star of the future: Damiano De Tommaso. The drivers used the famed medium-compound RX7 tyre for the shorter stages on the all-asphalt event, held at the iconic Italian grand prix venue, and the harder RX5C tyre (an evolution of the RX5B) on the long, 33-kilometre ‘grand prix’ stages. Rossi won five stages while Capello won four. The two went head-to-head again for the Master Show, which was also won by Rossi in front of an enthusiastic crowd. 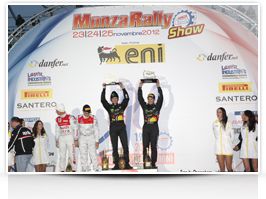 In neighbouring France, Formula One star Robert Kubica put in a stunning performance on the Rallye du Var, the final round of the French Rally Championship. The Pole was driving a Citroen C4 WRC for only the second time on Pirelli tyres but he quickly built up a commanding advantage on the most challenging event he has yet faced in his new rally career. Unfortunately he crashed out on the penultimate stage when he had a lead of nearly five minutes and a near-certain victory, having defeated some of the biggest names in the demanding French series on the way. On the dry stages Kubica used the latest Pirelli RX7A tyre (a new evolution of the RX7) and the RX5C for longer stages, as used at Monza. The same tyres were used by Peugeot driver Cedric Robert, who went on to win the rally after Kubica crashed. The second day of the Rallye du Var was characterised by wet and dry weather: perfect conditions for Pirelli’s RX9 tyre, which copes brilliantly with damp and changeable surfaces. Under French championship regulations, the tyre may be hand-cut in a prescribed way (not exceeding 30% of the total surface area) in order to expel more water and loose gravel – which it did extremely effectively. Pirelli’s product manager Terenzio Testoni said: “This was another extraordinary weekend of success for Pirelli, at the end of the season in Italy and France. We were able to use two brand new compounds for the 2013 season – the RX7A and RX5C – which provided both grip and performance in challenging asphalt conditions, meaning that our drivers can approach next year full of confidence, as we expected. Valentino – who has been an excellent friend of Pirelli over the year – did a remarkable job once more in Monza to defeat drivers with plenty more experience than him. Exactly the same can be said of Robert, who came so close to a sensational victory, which would have been his third on the trot. With wins and top performances in every category, it could not have been a better weekend for Pirelli to round off a season of success, but this is no coincidence. Instead, it is down to our constant development work and technical know-how, which combine to make us the world leader in the Ultra High Performance sector.”