Pirelli Truck, a Century of Transport 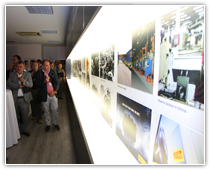 2011 is an important year for the Pirelli Truck business unit. It is the year in which it celebrates its centenary of truck tyre manufacturing innovation. And on 15th and 16th September in Izmit in Turkey it got the official celebrations underway when unveiling new products from the 01 Series before numerous international dealers and journalists. Guests were treated to a photographic exhibition that takes a look at the development of Pirelli tyres from the beginning of the last century right up until today. Specialising not only in tyres for trucks, but also for cars and motorsport, the manufacturing works in Izmit, Turkey has become the natural stage for the anniversary. The exhibition is a sort of journey through time that begins with pictures of haulage vehicles from the early twentieth century: a period of fundamental importance because this is when iron tread bands were replaced by solid rubber tyres. The exhibition continues on through to the present day illustrating truck tyre technology, innovation and development. 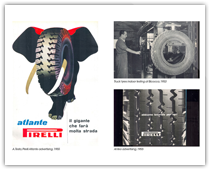 The anniversary holds great significance for Pirelli because it was 1911 that marked a turning point: the Pirelli car tyre price list (dated 20th September 1911) specifies the size “1000 x 150 millimetres”, the smallest possible in order to class “Ercole” as a truck tyre. Truck-tyre technology development and manufacturing underwent a drastic change during the Twenties. This was when cord fabric replaced the antiquated square-woven fabric and the straight-side fixing system superseded the beaded edge one. The Sixties represented another milestone for Pirelli with the implementation of radial tyres on heavy vehicles as can be seen in many of the photos on display. The exhibition also tells the story of the work of Pirelli employees in the finishing and vulcanisation departments. But it is from the Eighties up until the present time that the Pirelli truck sector has consolidated its international presence by opening important manufacturing sites in Brazil and Egypt and upgrading the Izmit factory. A constantly unfolding story …