Tyre strategy contributed to some close racing in Formula 2 and GP3 at the Red Bull Ring.
Ferrari Driver Academy member Charles Leclerc won the feature race from his fifth pole position in a row. He started the race on the soft tyre, together with his Prema team-mate Antonio Fuoco in second and the ART Grand Prix drivers Alex Albon and Nobuharu Matsushita, who ran third and fourth in the early stages. Most of the other drivers started the race on the supersoft tyre, led by the DAMS drivers Nicholas Latifi and Oliver Rowland, who pitted on lap six and lap seven respectively for the soft tyre. The leading cars pitted with around 10 of the 40 laps remaining to switch from soft to supersoft. Leclerc remained in the lead, but Fuoco rejoined between Rowland and Latifi. He used the better grip offered by the supersoft to quickly pass Rowland, but it was Latifi that was fastest in the closing laps and he worked his way up to second and finished on the tail of Leclerc. 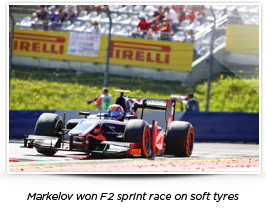 The Formula 2 sprint race was won by Artem Markelov, who set a fast pace at the front of the field after starting on reversed grid pole position, but still managed to preserve his soft tyres well. His Russian Time team-mate Luca Ghiotto also showed good performance, rising from 14th to finish fourth.
In GP3, where the soft tyre was used, the ART Grand Prix team dominated the first race and occupied the first four places, with George Russell winning after a close battle with Jack Aitken. Behind the ART quartet there was an exciting race-long battle over fifth place between several cars lapping in close proximity. Raoul Hyman won in the second race, leading from pole position on the reversed grid and absorbing pressure from Giuliano Alesi, the son of ex-Formula 1 star Jean Alesi. Nirei Fukuzumi repeated his third place from the first race despite starting sixth. 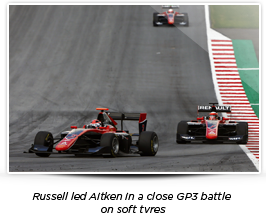 Quotes:
Pirelli’s head of car racing Mario Isola: “We saw an entertaining Formula 2 Feature Race on Saturday with opposing tyre strategies creating some close racing until the finish. Charles Leclerc judged his strategy perfectly: the lead he built in the middle of the race was crucial late on when Nicholas Latifi was very quick on the alternate strategy. In GP3, there was some close racing throughout the field in both races, even though the degradation was low due to the nature of the Red Bull Ring.” Charles Leclerc, Formula 2 Feature Race winner: “It wasn’t easy, definitely! At the end Nicholas was coming very, very quickly. We had a good start and I managed the tyres as much as I could, because I knew I had to do a lot of laps to the pitstop, so I was managing the gap to the end. At around the middle of the stint I could push a bit harder to open out the gap, and that helped us to win the race because at the end the gap was not huge. The last part of the race was really hard to manage, because with the soft tyres they degrade a lot quicker than we thought, and Nicholas was just very quick.” Both Formula 2 and GP3 will be back in action at Silverstone next weekend (July 13-16).