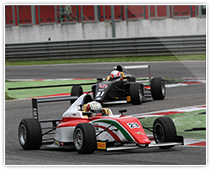 Pirelli is once again the sole tyre supplier to the Italian Gran Turismo Championship. The ACI board has appointed Pirelli as exclusive tyre supplier thanks to the results of the track tests and the economic offer. The fascinating and powerful vehicles which are competing in the 12th edition of the Championship ending on October 26th in Monza are, therefore, all running on Pirelli tyres. There will be seven events with two races using six different Italian racing tracks plus one in France. The Italian company, which supplied the Italian GT Championship in all the preceding editions except for 2010/11 and 2012/13, will be sole tyre supplier for the period 2014/2015. Pirelli is also the opening tyre supplier to the Formula 4 Championship ending on October 19th in Barcelona. Pirelli was sole tyre supplier to the new seven-round FIA series. The cars, produced by Tatuus, were powered by Abarth and equipped with Magneti Marelli electronics: an all-Italian effort forming a blueprint for entry-level motorsport. Pirelli created a new 13’’ tyre specifically for Formula 4, which is of the same dimensions as this year’s Formula 3 tyres. The front tyre size is 200-540-13, the rear is 250-575-13. The new Pirelli tyres for the championship were available in just two types: dry (medium compound, DM) and wet. Consequently they had to be extremely adaptable to a very wide variety of conditions and circuits: from the tight hairpin bends of Adria to the flat-out straights at Monza. Formula 4 and GT Cup are the latest additions to Pirelli’s extensive motorsport portfolio, which includes more than 250 championships worldwide.