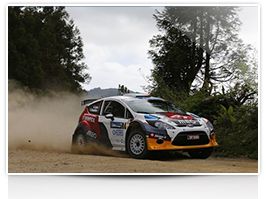 Pirelli tyres made the difference on last weekend's Rallye Acores, round five of the FIA European Rally Championship, enabling Portuguese driver Bernardo Sousa to seal victory on the very last stage in his privately-run Ford Fiesta RRC. Sousa chose the medium compound Pirelli KM4 tyres for the final and decisive 21.30-kilometre gravel stage, to the east of Sao Miguel island. Having entered the stage just five seconds in front of his direct rival, Kevin Abbring in the official Peugeot Rally Academy 208 T16, Sousa extended his lead to win the rally by 6.2 seconds, thanks to help from his Pirelli tyres. Sousa, who turned 27 the day before winning the rally, said: “In the end probably I think we did the difference on the last stage because of the hard compound of Pirelli. On the beginning of the stage it was a bit difficult but then kilometre by kilometre, the tyre was always having a lot of performance.”

What made Sousa’s win even more remarkable was the fact that a sensor problem meant that he could not reach parc ferme after qualifying, before the rally start. Because of that his qualifying time was disallowed and he was forced to run first on the road during the opening day. The same problem meant he did not have an operative launch control system at the start of all 17 stages, which he reckoned was costing him at least two seconds each time. The Pirelli KM tyre is specifically designed for soft and challenging gravel, such as that found on the island of Sao Miguel, which features one of the most dramatic stages in the world: Sete Cidades (won by Sousa twice) that runs around the rim of a volcano.

The KM is an asymmetric tyre that features a unique open pattern, specifically designed to evacuate wet, loose and rocky gravel. It was this ability, combined with strength and duration, which helped Sousa to win the rally. In the cool but variable conditions of Friday he used the soft KM6 compound, before moving onto the harder KM4 compound on Saturday.

“I knew if we wanted to win the rally, we had to go onto that tyre,” said Sousa. “Maybe it was a gamble, but it worked. A big thank you to Pirelli.” Pirelli’s product manager Terenzio Testoni concluded: “Once again, just as we saw on the Targa Florio Rally only two weeks ago, a Pirelli tyre made the difference: on gravel this time, rather than asphalt. The KM6 provided performance, stability and resistance to wear, enabling Bernardo to take a fantastic victory despite his mechanical issues.”

Ends For more information about Pirelli, please contact Anthony Peacock on +44 7765 896930 or anthony@mediaticaworld.com