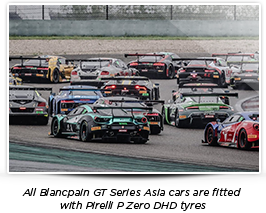 The brand-new Zheijang circuit in China hosts the final round, featuring 16 corners on the 3.2-kilometre track. The Blancpain GT Series Asia has featured 10 races in four countries so far, with the drivers’ and teams’ titles set to be decided in both GT3 and GT4 this weekend over two 60-minute races. The flowing Zhejiang circuit is located close to Shaoxing: a city of five million people south of Shanghai – which is only an hour away by high-speed train.

The teams will all use Pirelli’s latest P Zero DHD tyres, as seen on the main Blancpain GT Series that recently concluded in Barcelona. These tyres are designed to perform strongly on a wide variety of different cars and circuits; in order to be equally effective in China in October as they are at Monza in April.

The manufacturers using them in the different GT championships all over the world also choose Pirelli P Zero tyres as original equipment for their high-performance road cars, underlining the technology transfer between road and track. With China being one of the most rapidly-expanding markets in the premium and prestige sectors, it is clearly of paramount importance to Pirelli, the world leader in top of the range tyres.

As well as the world’s top car manufacturers, the Blancpain GT Series Asia also attracts some of the top drivers in GT racing, such as 2016 Blancpain GT champion Maxi Buhk, who will be driving a GruppeM Mercedes GT3 this weekend.

Pirelli racing activity manager Matteo Braga said: “The fact that China is investing so heavily in new tracks such as Zheijang underlines the phenomenal growth in motorsport throughout the region, with Pirelli increasing its commitment accordingly. As GT racing is the closest form of competition to supercars seen on the road, it’s a perfect fit for us here.”

Underlining Pirelli’s presence will be an activation area and fan engagement zone for the first time in this championship, featuring a car display, DJ area, and video games.

In a change to the normal schedule, qualifying took place on Friday afternoon before the opening race on Saturday at 14:00 (local time). The final race of the season begins on Sunday at 10:50.

For more information about Pirelli, please contact Anthony Peacock on
+44 7765 896 930 or anthony@mediaticaworld.com