Antonio Cairoli back to winning ways in MXGP while Tim Gajser is the new championship leader. Seven out of seven for Jeffrey Herlings in MX2 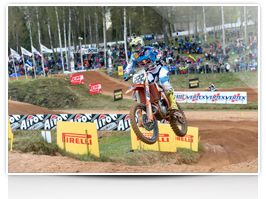 The traditional ‘Talkessel’ circuit in Teutschenthal hosted the Grand Prix of Germany and the seventh round of the 2016 FIM Motocross World Championship. The scenic track is characterized by fast uphills, downhills and a medium-hard soil that became very rough through the weekend as well as technical and tricky. Pirelli riders faced the conditions relying on SCORPION™ MX32™: without a doubt the reference tyre in GP motocross and reaffirmed Pirelli's winning streak in both classes. After a difficult year, Tony Cairoli has tasted overall victory once more in the MXGP class. The eight time World Champion used SCORPION™ MX32™ 110/90-19 rear and SCORPION™ MX32™ 80/100-21 front, to dominate the Grand Prix; winning the qualifying heat and both races on Sunday. Second place belonged to Tim Gajser who preferred the SCORPION™ MX32™ 120/90-19 rear. The Slovenian rookie also snared first place in the championship standings. A great fourth place was obtained at his home race by Max Nagl who, along with Jeremy Van Horebeek, successfully used the new front tyre especially developed by Pirelli for hard terrain. Romain Febvre had to settle for fifth place. He was forced to make a difficult comeback in race 1 due to two crashes on the first lap.

Jeffrey Herlings had no rivals once more in Teutschenthal and continues to lead the MX2 championship standings with maximum points. Thanks to SCORPION MX™ 32™ 110/90-19 rear and the SCORPION™ MX32™ 80/100-21 front, the former world champion ruled the roost in the qualifying heat and in the two races proving his incredible superiority over his opponents. A good performance in Germany from Dylan Ferrandis who, with the same Pirelli tyres as Herlings, finished the Grand Prix in second place. Jeremy Seewer completed a full Pirelli podium. Max Anstie briefly led the second moto and ended the day with fourth place overall. There was success for Pirelli even in the third round of the European EMX250 Championship that was won by Australian rider Hunter Lawrence. The world championship continues this coming weekend with the eighth round of the season, the Grand Prix of Trentino, which will be hosted on the “Ciclamino” track in the Alto Garda lake area. Race results: 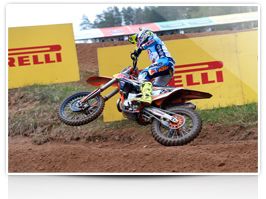