PIRELLI WINS THE “GOLD TROPHY AWARD” FOR THE 2013 ANNUAL REPORT, ONE OF THE HIGHEST LEVELS OF RECOGNITION FOR GRAPHICS AT THE WORLD LEVEL

“Spinning the wheel”, the Pirelli 2013 annual report which involved ten international talents who were invented to reinvent the wheel through their respective disciplines, won two design and graphics prizes. The Pirelli Annual Report, in fact, received the Gold Trophy Award, one of the highest levels of recognition at the world level awarded by the International Design Awards (IDA) and the third prize in the Annual Report category just assigned by the jury of the European Design Awards in Istanbul. 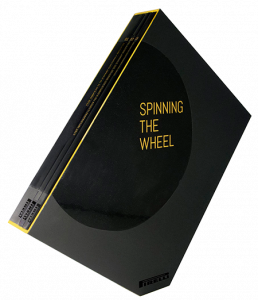 With graphics jointly developed with the Cacao Design agency, the 2013 annual report was selected from among thousands of volumes from around the world and the recognition confirms Pirelli’s excellence in the areas of design and communication. Already in 2012, Pirelli was awarded the Certificate of typografic excellence for its innovative typographical solutions. In particular, in the case of the International Design Awards, whose jury includes some of the most influential names in design at the global level, the Gold Trophy Award was given to the 2013 Pirelli annual report from a selection of over 1,000 entrants, from 52 countries, and it awarded the design which was at once refined, creative, functional and innovative. The jury of the European Design Award – made up of the editors of the most renowned European design publications – also awarded Pirelli’s 2013 annual report with the bronze medal in the Annual Report category, selected from hundreds of entries from 21 countries. The two prizes are an acknowledgement of Pirelli’s capacity for innovation which has forever been characterized not only by its products but also its methods of communication. The 2013 annual report developed with Cacao Design, which combines painstaking graphics and a touch of originality, is presented vertically with a tilt of 45 degrees, poised on its lower right corner, a balancing act made possible thanks to the die-cutting into the three volumes and their container. 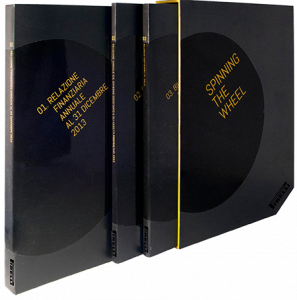 Pirelli’s recently published 2014 Annual Report was also produced and developed in collaboration with Cacao Design. The recounting of tyres through art was entrusted in this case to three young street artists of international fame: the images of their works are included in an annual report which this year places all three elements of the report (Financial Report, Governance Report, Sustainability Report) into a single volume, as well as the Pirelli company profile and summarized data of the last year’s activities. The 2014 annual report project can be seen at: www.pirelli.com/ar2014.

PIRELLI WINS THE “GOLD TROPHY AWARD” FOR THE 2013 ANNUAL REPORT, ONE OF THE HIGHEST LEVELS OF RECOGNITION FOR GRAPHICS AT THE WORLD LEVEL