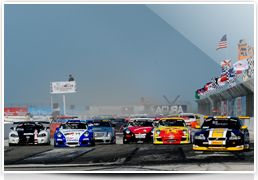 Pirelli’s race season kicked-off in a big way this weekend with major motorsports activity on nearly every continent: Formula 1, WRC Academy, World Superbike and the opening of the 2011 Pirelli World Challenge Championships racing season this week in the Streets of St. Petersburg, Florida. The double-header race and full grid marked a transition from treaded tires to Pirelli P Zero racing slicks for the series as teams, drivers and fans welcomed Pirelli as the new title sponsor and official tire supplier of the series, which features three classes - GT, GTS and Touring. “Exciting,” was the word that overall and GT class winner Patrick Long, from Belleair, FL, GTS class winner Jason von Kluge, from Ann Arbor, MI, and Touring Car winner Lawson Aschenbach, from Darnestown, MD, each used to describe Saturday’s Acura Sports Car Challenge Presented by Pirelli, featuring a full grid of 49 Pirelli World Challenge Championship cars battling on the temporary street circuit in St. Petersburg. The season-opening race was part of the Honda Grand Prix of St. Petersburg. “Pirelli World Challenge Championship racing was an excellent way to kick off Pirelli’s North American racing calendar,” said Rafael Navarro, III, Director of Marketing and Motorsport for Pirelli Tire North America. “When motorsport is in your DNA it is always great to hear about immediate time improvements gained from the switch to Pirelli P Zero Racing Slicks. This was expected in the transition and not our focus. Our challenge and commitment is to deliver durable and consistent products to the competitors which will produce improved racing. We are here for the long haul and are interested in watching the development of each team during this transfer to our proprietary P Zero Technology. This is only going to get better – we’re off to a great start with this double-header in St. Petersburg!” Even as Pirelli P Zero racing slick tires lowered lap times all weekend for the World Challenge machines, a new qualifying rule for doubleheader weekends went into effect for 2011. During doubleheader weekends with just one qualifying session, the grid for the second race is set by fastest lap times during Saturday’s race. “It’s an exciting series, and I think World Challenge has progressed since then last time I raced here in 2006,” Long said. “The tires are great; the multiple class structure adds an endurance element to the track and to the race series. I think it’s a lot of fun, but its certainly challenging, especially on a street course.” Sofronas also got past Pobst on the restart and landed on the podium for the third time in as many starts at St. Petersburg. “I love the Pirellis,” said James Sofronas, 3rd Place GT finisher on Saturday. “This is a welcome change for us. We know Pirelli is a great company and they make a great tire. You can see the speeds of the cars are so much faster with them, the cars like them, and it’s going to step up everybody’s game.” Touring Car winner Lawson Aschenbach was also pleased with the change to Pirelli P Zero racing slicks. “The tires are actually fantastic,” said Aschenbach. “But considering it was my first time in a Touring Car, it was just awesome. Hats off to Pirelli for giving us a great tire.” Today’s Pirelli World Challenge Championship P Zero has an external profile and internal structure which is designed to maximize the dimensions of the contact area. The tire’s belt geometries have been developed to optimize the lateral force generated in cornering on the racetrack. The tires for the series are manufactured at Pirelli’s new Motorsport manufacturing facility in Turkey. “In recent years Pirelli has become best known for its activities in grand prix, sports and GT categories where, in addition to winning many different championships there has been a very direct technology transfer between P Zero racing tires and P Zero road tires,” said Tom Gravalos, VP of Marketing, Motorsport and Original Equipment at Pirelli Tire North America. “Pirelli World Challenge Championships provide us even greater access to our OE partners and their motorsports programs, and this weekend’s full grid and exciting racing was a testament to our synergies with these partners.” After two rounds, Long leads the GT Drivers’ Championship with 322 points, followed by Sofronas (233), Crescentini (180), Skeen (177), and Pobst (162). Foss leads in GTS with 251 points, followed by von Kluge (240), Cunningham (214), and Brown (211). Aschenbach leads the Touring Car Drivers’ Championship with 284 points, followed by Herbert (230), Mason and Seguin (175 each), and Ronald Zitza (160). For more race information, please visit: www.world-challenge.com. The 12-race 2011 Pirelli World Challenge GT, GTS and Touring Car Championships campaign continues with round 3 at Toyota Grand Prix of Long Beach, April 15-17. All races will be broadcast on VERSUS. Pirelli Tire North America designs, develops, manufactures and markets tires for passenger vehicles in both the original equipment and replacement markets as well as markets and distributes tires for motorcycles and motorsports. Located in Rome, Georgia, Pirelli’s Modular Integrated Robotized System (MIRS) employs state-of-the-art technology to manufacture tires for both export and domestic markets. For more information please visit www.us.pirelli.com.