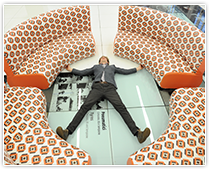 The wheel, a simple and yet revolutionary invention in human history, was at the heart of a communication project for the Pirelli Annual Report 2013.  “Spinning the wheel” was, in fact, the title of the two day workshop to which ten young, emerging talents on a international level participated, coordinated by the British novelist and playwright of Pakistani origin, Hanif Kureishi. They were asked not only to “reinvent the wheel”, coming from worlds which have nothing to do with tyres, but also to reflect on the essence of talent - how to recognise it, to cultivate it and to express it. The aim of the project was to  highlight the creativity, intuition, commitment, tenacity and passion that gives form to a successful idea, project or product. Brazilian tenor Jean Silva for example focused on “the roundness” of the voice, while Fergus McAuliffe, Irish environmental scientist, concentrated on the importance of communicating scientific projects to a non-scientific audience and the Italian chef Agata Felluga imagined the arms of table companions as the spokes of a virtual culinary wheel. The Italian physicist Fabio Sciarrino investigated instead the development of the photonic wheel, applied to quantum and sensoristics communication. The other talents taking part in the workshop were Heidi Paula Langvad - fashion designer (Denmark); Sandra Hofmann Boss – biologist (Switzerland); Jaime Magen - architect (Spain); Rodrigo Almeida - designer (Brazil), Sandin Puce - film director (Bosnia Herzegovina) and Lei Lei - animation/cartoons (China). 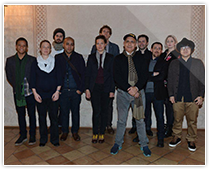 Once again Pirelli has put its faith in the young and on their ideas in order to express the company beyond the mere figures and technical documents which characterise the financial statement reports. Last year young university students from all around the world were called upon to describe their values for the future and the ten best were then illustrated by New Yorker cartoonist Liza Donnelly.